I love research trips- Bath and Beyond! 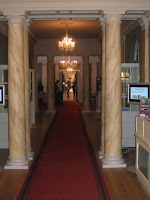 I love any excuse for a research trip and a chance to escape a frantic and busy life, so when my husband suggested a trip to Bath at the weekend I was very excited. I thought I'd share some of the photos I took of the Assembly Rooms in Bennett Street, which are stunningly beautiful. It is so easy to imagine social gatherings taking place here in Jane Austen's time; you can hear the chatter and rustle of silk gowns just by looking into one of the rooms. The top photo shows the entrance, which some of you may recognise from the television adaptations of Persuasion. 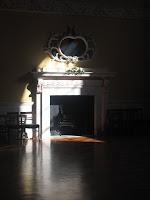 The second shows one of the fireplaces in the Octagon room which is where card tables might be set up for those not interested in dancing and wishing to try their luck with a little gambling. 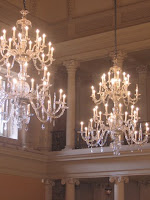 Lastly, is the Tea Room which was used primarily for refreshments and concerts. Meals were served throughout the day from public breakfasts to supper during dress balls. Food was laid out on side-tables and included such delights as sweetmeats, jellies, wine, biscuits, cold ham and turkey. Tea was the favourite drink, generally without milk, but occasionally with lemon or arrack (fermented cocoa).

In this extract from Jane Austen's Persuasion, Anne Elliot has met up with her old love, Captain Wentworth, at the Assembly Rooms. She has recently discovered that he is not in love with Louisa Musgrove and from the very recent conversation with him dares to hope that he may still have some feelings for Anne.

As she ceased, the entrance door opened again, and the very party appeared for whom they were waiting. "Lady Dalrymple, Lady Dalrymple!" was the rejoicing sound; and with all the eagerness compatible with anxious elegance, Sir Walter and his two ladies stepped forward to meet her. Lady Dalrymple and Miss Carteret, escorted by Mr. Elliot and Colonel Wallis, who had happened to arrive nearly at the same instant, advanced into the room. The others joined them, and it was a group in which Anne found herself also necessarily included. She was divided from Captain Wentworth. Their interesting, almost too interesting conversation, must be broken up for a time, but slight was the penance compared with the happiness which brought it on! She had learnt, in the last ten minutes, more of his feelings towards Louisa, more of all his feelings, than she dared to think of; and she gave herself up to the demands of the party, to the needful civilities of the moment, with exquisite, though agitated sensations. She was in good humour with all. She had received ideas which disposed her to be courteous and kind to all, and to pity every one, as being less happy than herself.

The delightful emotions were a little subdued, when on stepping back from the group, to be joined again by Captain Wentworth, she saw that he was gone. She was just in time to see him turn into the Concert Room. He was gone -- he had disappeared, she felt a moment's regret. But "they should meet again. He would look for her, he would find her out long before the evening were over, and at present, perhaps, it was as well to be asunder. She was in need of a little interval for recollection."

Upon Lady Russell's appearance soon afterwards, the whole party was collected, and all that remained was to marshal themselves, and proceed into the Concert Room; and be of all the consequence in their power, draw as many eyes, excite as many whispers, and disturb as many people as they could.

Very, very happy were both Elizabeth and Anne Elliot as they walked in. Elizabeth, arm-in-arm with Miss Carteret, and looking on the broad back of the Dowager-Viscountess Dalrymple before her, had nothing to wish for which did not seem within her reach; and Anne - but it would be an insult to the nature of Anne's felicity to draw any comparison between it and her sister's: the origin of one all selfish vanity, of the other all generous attachment.

Anne saw nothing, thought nothing of the brilliancy of the room. Her happiness was from within. Her eyes were bright, and her cheeks glowed; but she knew nothing about it. She was thinking only of the last half-hour...

Jane Odiwe
Posted by Historical Romance Author at 9:17 AM

Fabulous photos, Jane! Lucky you for gettijng such a nice outing.

I had my own Lost-In-Austen moment last week when I went to the New Subscription Rooms at Bury St Edmunds. Photos on my blog if you'd like to check them out.

Thank you very much for that, Anne. I love Bath but live so far away I can't get there very often so it is lovely to be reminded of the inspiring buildings there.

I had such a lovely time and dragged my poor, long-suffering husband round every Austen haunt I could think of - you'll all be bored with photos of Bath by the time I'm done!

Looking at your lovely pictures makes me want to go back to Bath yet again... I did research there for 'In All Honour' yet still long to visit the city again. Meanwhile, thanks for sharing these and please do add more pictures of Bath..

Apologies - Jane! Mental aberration: I was so blowen away by the pictures of Bath...

Bath is such a beautiful place, isn't it? I've only been there once (well, it's not just around the corner for me *sigh*), but I still have fond memories. :) Thank you for bringing them back to me! Lovely photos!

Melinda, I loved that - to be called Anne for just a moment...

I've been going to Bath for an annual outing for many years, but I still get really excited about going - it's my equivalent of fairyland, I suppose. There's something about going down that hill (albeit the tortuous end of the motorway) and turning onto the road that takes you away from the 21st century with all those beautiful houses. I find it hard to come back and as for settling down again to work...