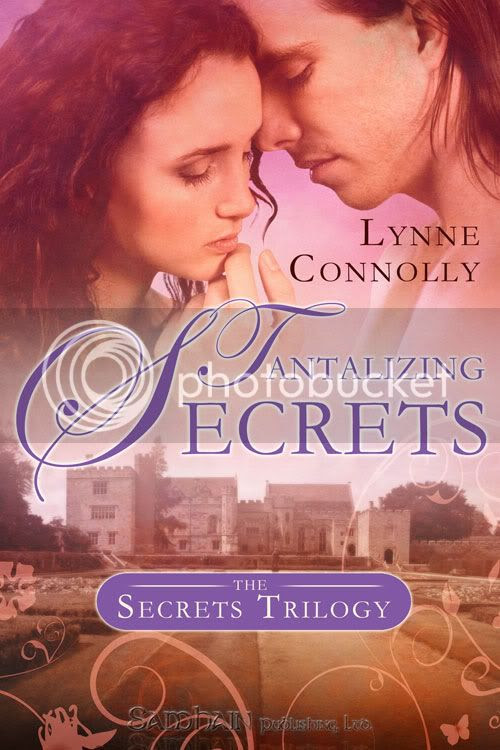 The third book in the Secrets series is out on the 24th February from Samhain. It's set in my home town of Leicester, and my heroine, Arabella, lives in a reimagined version of Belgrave Hall, a pretty manor house now in the city, but originally built a mile or two outside. Originally, this was conceived as a trilogy, but I've received so many requests for stories for some of the characters featured in the series, that I'm thinking of extending it.
Oh, and isn't the cover pretty? Ann Cain rocks!

Arabella Mason is too busy investigating her brother-in-law’s “accidental” death to entertain thoughts of love. She’ll go to any lengths to ease her sister’s grief, even accept the help of the distressingly attractive Viscount Bredon, Peter Worsley. Instead of answers, the trail of clues only leads to more questions. Who was her brother-in-law, really…and why does Peter, who poses as her brother in public, make mincemeat of her resistance in private?

A successful politician and confirmed bachelor, Peter has bedded the loveliest women in society. He never imagined he’d wind up in a Leicester backwater, helping a pretty widow investigate his brother’s untimely death. As his suspicions of foul play grow stronger, the danger rises—and so does his desire for Arabella. One kiss, and she snatches away all his resolve, leaving him wondering which he wants more…

To find his brother’s killer? Or keep Arabella safe—and make her his?#

Excerpt:
The coach lurched to a halt and they were flung forward. Peter flung out a hand to stop Arabella hurting herself, and was rewarded by a handful of fabric and a brief contact with one soft breast. He took her arm and hauled Arabella back on to the seat as the carriage pulled to a halt.
Breathlessly she stared at him and they both heard a gruff voice. “Stand and deliver!”
“Good Lord!” The gleam of battle sparked in him. Cautiously he settled the pistol in his pocket so it came easily to hand.
The door of the carriage was wrenched open. A heavily muffled figure stood outside. “Out,” the man commanded.
Peter descended and held his hand out to help Arabella. To his surprise, she wasn’t looking in the least shocked. If he didn’t know her better, he would have thought she was angry.
Lounging against the open door of the carriage, Peter stared at the highwayman. Their assailant was so muffled up it was difficult to make out much about him, but Peter noted the man was no taller than he was, and wasn’t grossly overweight. He’d pulled a cocked hat low down on his forehead and a muffler up over the lower half of his face.
Peter thrust his hands in his pockets, touching the rounded end of the pistol. In the other pocket, he had a knife, usually carried for more mundane purposes but it might come in useful too, given the chance. He kept Arabella in view, prepared to push her to the ground. Some highwaymen wanted more than jewelry and cash; he wasn’t about to allow that.
Arabella lifted her chin and glared at the man. There was no doubt about it now—fire flashed from her dark eyes. She was angry. Peter hoped she wouldn’t do anything foolish. He wished he could see the coachman but that was impossible without turning.
Their aggressor swore, fluently and, much to Peter’s surprise dropped the hand holding the pistol to his side. “Jewelry. Money.”
Then Arabella did something that took Peter completely aback. She put her hands on her hips and thrust her face forward in the age-old position of the fishwife. It said a lot for Peter’s newfound attraction that he found her pose delightful. “And who do you think you are threatening? Get in the carriage this instant!”

Posted by lynneconnolly at 5:12 PM

Peter Bredon, huh? A reference to Sayer's Lord Peter Wimsey? I like. :)

Conratulations Lynne. A great cover and an intriguing extract. Good luck with a possible series.