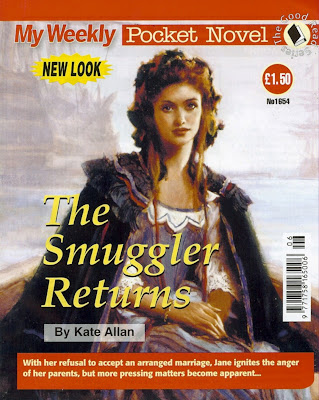 The Smuggler Returns is published by My Weekly Pocket Novel this week. It's available in WH Smith, Tesco and Asda and if you miss it, copies can be ordered by post from DC Thomson's subscription department.

The story is set in the first decade of the 19th century in Cornwall. Jane Tregarron refuses to accept an arranged marriage that will save the family fortunes. Running out of the house in anger after an argument, she slips and falls...

‘Miss?’
Jane started. A shadow appeared over her.
‘Miss?’ the voice repeated. It was smooth, calm but with an understandable veneer of concern. But he was someone she did not recognize. Who could it be?
‘Miss? Are you all right?’ A hand touched her forearm.
Jane turned her head. A young man crouched beside her, the wind tussling his damp, ash-coloured hair. A tall man with an aquiline nose. Something in the strong line of his jaw was familiar. His high cheekbones. His nose.
There was little chance of a real stranger being here. No one came to Penhaven without reason. Had she lost her memory? Who was he?
‘I slipped,’ Jane said. ‘I’m all right, thank you.’
His eyes regarded at her closely. ‘Can I assist you?’
His boots were highly polished. New boots, she was sure.
‘You know this ground is thoroughly wet?’ he said.
‘I didn’t chose to fall over,’ Jane heard herself day before she had the wherewithal to bite her tongue. She had no reason to be piqued with him. Perhaps if she had been less hasty, she would not have fallen.
‘I think, if you can stand, I should help you up. Let us at least find somewhere dry for you to recover?’
‘I’m sorry.’ Jane swallowed. ‘I’m not feeling completely all right. When I fell, it hurt and it’s still painful.’
‘Here.’ He stood up. The swallow-tails of his dark grey coat flapped in the breeze. He gave her his arm. Rain splashed down onto the stones of the path behind him.
He gripped her under both her arms and pulled. Strong arms; muscles like rock beneath her touch, Jane suddenly felt shy about holding onto him. He was a stranger, after all.