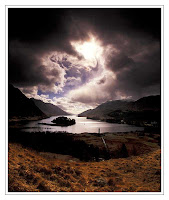 What is the enduring appeal of Scotland as a setting for the historical romance? Is it that it seems a mysterious land of legend and folklore, with a history that is dramatic, fascinating and frequently violent? Is it the beautiful, rugged landscape? And is that ruggedness reflected in the strong, passionate nature of the hero?

For me the appeal of setting a book in Scotland was to draw on the places I know and love. I set my book Kidnapped: His Innocent Mistress in Wester Ross in the Highlands at the beginning of the nineteenth century. My “version” of Kidnapped is a homage to the classic novel by Robert Louis Stevenson. A few years ago my mother-in-law gave me an ancient copy of the book as a birthday present. I had read and enjoyed Kidnapped many years before and now I picked it up again and was plunged into a world of romance and intrigue and adventure. I'm dating myself here but I also love the 1979 TV version with David McCallum as Alan Breck Stewart!

Kidnapped: His Innocent Mistress will be published by Harlequin
Historicals in the US in March and by Mills & Boon Single Titles in the UK in October. Those readers who know the original story and read my re-imagining will realise that my version only draws on half the original tale. I'd love to write a sequel! Here is an extract:

I knocked on the study door and went in, Mrs Campbell following me. The minister was seated at his desk with Mr Sinclair in a chair beside the fire. Mr Sinclair looked up when I came in. He had a thin watchful face tanned a dark brown from sea and sun, a face with character and resolution in the line of his jaw. I gave him a cool nod, which seemed to amuse him, and addressed myself to Mr Campbell.
“You wished to see me, sir?”
I spoke very politely but I saw the flash in Mr Sinclair’s eyes that suggested he thought this obedience out of character. A faint smile curled the corner of his firm mouth. I turned a shoulder to him.
“Catriona… Yes…” Mr Campbell seemed flustered, which was unusual to see. He gestured me to the long sofa. This piece of furniture was the most uncomfortable in the house and necessitated me to sit upright as though I were a bird perched on a twig. This did nothing to improve my temper, especially as Mr Sinclair seemed deliberately to lounge back indolently in his chair with a sigh of contentment as he sipped his brandy and watched me over the brim of the glass.
Mrs Campbell had followed me in and now hastened to see to her visitor’s comfort. “You have had sufficient to eat and drink, Mr Sinclair? May I fetch you anything else?”
I watched the gentleman smile his thanks and put Mrs Campbell at her ease. He had a very easy charm. I could not deny it. When Mrs Campbell went out again her face was flushed peony pink like a young girl’s.
“Well now,” Mr Campbell said, shuffling the papers on his desk, “there are matters to be settled, Catriona. Matters to do with your future. We have been thinking that now your parents have passed on, the natural place for you is with your remaining relatives.”
I thought that he meant my mother’s family, who lived far, far away on the south coast of England. My mother had made a scandalous match twenty years before when, as a young debutante, she had visited Edinburgh, fallen in love with my father, a poor schoolmaster, and eloped with him.
“Can I not stay here?” I asked. “Here in Applecross, I mean,” I added, in case poor Mr Campbell had thought I was suggesting I should live on his charity indefinitely.
“I could help the new schoolmaster, or act as companion to old Miss Blois...”
Mr Sinclair smothered what sounded suspiciously like a snort. I looked at him.
“I beg your pardon, sir?” I said frigidly.
There was laughter in his eyes. “Forgive me, Miss Balfour,” he said, “but I cannot see you as companion to an elderly lady. Nor as a schoolmistress, for that matter.”
I set me lips in a thin line. I did not see what business it was of his. “You do not know me very well, Mr Sinclair,” I said. “My father taught me himself, having no prejudice against the education of females. I can teach reading and write a very fair hand.”
“I do not quarrel with your father’s abilities as a tutor,” Mr Sinclair said lazily. “I simply have seen no evidence that you have the temperament required to do the job yourself.”
I was so cross at his presumption that I almost burst there and then. “Well, I do not see it is any concern of yours,” I began, but Mr Campbell made a slight movement and I subsided, holding fast to the fraying shreds of my temper.
“It would not serve, Catriona,” he said. “Applecross is a small place and it is time for you to go out into the world, the sooner the better. I have already had three requests from gentleman for your hand in marriage and have no desire to be turning more away from my door.”
I was astonished. Not one single gentleman had approached me with a view to marriage and I could not imagine who could have asked Mr Campbell for permission to pay their addresses to me. I stared at him in puzzlement.
“Who on earth…”
Mr Campbell ticked them off on his fingers. “McGough, who farms up beyond Loch Ailen, young Angus the shepherd and Mr Lefroy of Callanish.”
This time there was no doubt that Neil Sinclair was laughing. His shoulders were positively shaking. I tried to ignore him whilst inside me the anger seethed at his presumption.
“McGough has buried three wives already,” I said, “young Angus is kind but a mere lad, and Mr Lefroy wants a housekeeper he does not have to pay for.”
“A wife is more expensive than a housekeeper in the long run,” Mr Sinclair observed laconically.
I swung around and glared at him. “Do you know that for a fact, sir?”
His dark eyebrows went up. “Not from personal experience, madam,” he drawled, “but I do know on the strength of a few hours acquaintance that you would no more make a biddable wife than you would a suitable lady’s companion.”
Nicola Cornick
Posted by Historical Romance Author at 2:03 PM

ooooh fabulous, Nicola. Scotland lends itself to wild, romantic adventures, so can't wait to read this one!

Thank you, Melinda, thank you, Jan! Yes, I must admit that David McCallum was my inspiration for this hero. Another thing I enjoyed about writing this book was writing in the first person. It was very different and an interesting experience.

I really like the first person point of view here, Nicola. It really draws me in...