Do we lead our characters or do they lead us? 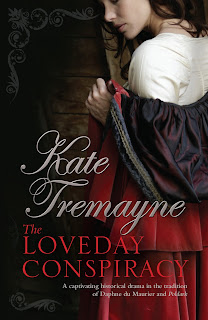 This is the fabulous new cover for The Loveday Conspiracy. It was a constant inspiration to make the story as dramatic and emotive as possible. It will be published in hardback in June and paperback in October.

I have just delivered THE LOVEDAY CONSPIRACY to my editor and it has been my most challenging novel in the series. Throughout the books the themes have been multi-faceted and there was more than one conspiracy the family were involved in. One male thought he could outwit the women’s moral outrage at his conduct only to find that when they band together they are formidable opponents. Both Adam and Japhet Loveday have their own plots to bring an enemy to heel, and when they work together to serve their country in a conspiracy to bring a traitor to justice, they discover their own lives are in danger.

As with all intricate plots the drama must be kept tense and the high action plausible at all times. The unfolding of the story is carefully choreographed and the characters given their motivation to act out the events on the page. Yet in the heat of the plot with emotions from the characters running high, do we strictly adhere to the storyline we have created, or do we allow our characters to dictate their next move. I believe that if you know your characters as well as you know your best friends they follow the necessary plan mapped out for them. However, like even best friends, there can be a hidden agenda they had not previously shown to us, or a side of their nature they had kept firmly in check until circumstances bring it bursting forth.

With the wild blood governing the emotions of the Loveday men, the unexpected is always possible. The dramatic conclusion of the final conspiracy in this novel was fast paced and action packed. Then suddenly without warning the characters are no longer acting out the scenes as I had intended. They interceded to mould the events in their own irrepressible fashion. All the time I tried valiantly to keep them on track, the scenes did not work to my satisfaction, and with the deadline looming this was very stressful. One morning they just took over. For most of the last three chapters I had to sit back at the end of my writing day dominated by the shock of how they had reacted, yet knowing that this was the only course that they would have taken. What emerged was an even more suspenseful and a greater page-turner. The price I paid for this was I was left each evening in a state of semi-panic thinking ‘how do I get them out of that scenario?’ and also keep everything plausible and achieve a satisfactory and inevitable conclusion for the reader. The Lovedays had literally dictated how they would have reacted to the danger they faced, which was far more emotive that all my careful plotting and I knew I had to follow their lead.

That is the joy of our writing and the challenge. It was also amazing how after several sleepless nights how little I had to edit previous chapters for the resolution to be exactly right for an exciting and unexpected ending.

I believe most of our writing is done on a deeply subconscious level, the depths of which even we as the writer are not always aware.

I also announce that following our exciting invitation to contribute to the Risky Regencies blog that the winner of my competition was Pamela Bolton-Holifield.

Kate Tremayne
Posted by Historical Romance Author at 9:36 AM

Fascinating, Kate - but how satisfying to know that you'd created the characters 'right' for them to act that way

I've changed the plot of my current work in progress about five times, simply because my characters will not follow my carefully crafted synopsis. And just as I start feeling comfortable with it all and feel able to enjoy it, they do it again. I have one true concern. With all the talk lately of Pride and Prejudice and aliens or predators I can hardly hit the keyboard for fear of one turning up. I don't do horror - I'm far too squeamish!

Carol Townend said...
This comment has been removed by the author.
8:58 AM

Hi Kate
I LOVE it when characters refuse to do what is planned! As you say, it can be scary, but it is also incredibly satisfying, particularly when the story starts to take delightful new twists and turns...

And that cover is gorgeous!

It is a relief to know that I do not suffer alone with irrepressible characters and it is good for a writer to be drawn out of their comfort zone. Though it is not always so good for the blood pressure.