We'd like to welcome Carol Townend to the blog.

Thank you! It's good to be here!

I love history, particularly the medieval period. Wherever I go, it seems that the past is lying just below the surface of the present. It is waiting to reappear, it wants to be seen.

Ancient cities like Carcassonne in France are not simply stone museums: there are soldiers in pointed helmets patrolling the ramparts, if one looks very carefully one can still see them. It is easy to imagine that the tourists thronging the narrow streets of Carcassonne today are the merchants, peddlers and townsfolk of yesterday. The rooms in the castle are not just empty stone chambers, they are warmed by roaring fires. Colourful tapestries decorate the walls. In the great hall a handsome lute player is eyeing up the serving girls, while up in the solar a lady is quietly sitting in a window embrasure, pretending to do her embroidery while really she is looking down at one of the knights as he practises in the lists below. It’s all there in the buildings.

Here is a view of the lists as seen from a window in Carcassonne: 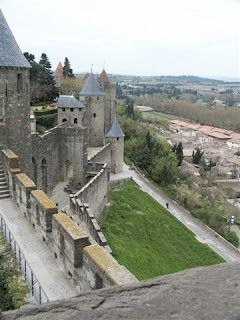 At home in England Winchester, in what used to be known of as Wessex, has been a particular source of inspiration, it has so many layers of history! The original layout was Roman and later the Saxon kings made it their home - King Alfred repaired the old Roman walls.

Winchester is the focal point for my Wessex Weddings series. The books are all set in the early Norman period, just after the Battle of Hastings. It is a moment in English history when the Saxon aristocracy is being forced out by the interlopers from Normandy and this transition period is full of conflict. The newcomers are desperate for honours and land while, for their part, the Saxons do not want to give up one inch of ground. This is where the hero of His Captive Lady comes in. His name is Saewulf Brader.

His Captive Lady was unplanned, in the sense that Saewulf, aka Wulf, jumped into my mind and demanded that I tell his story. I had just finished An Honourable Rogue and the idea was that Sir Richard of Asculf who features in that should have his story told next.

The plotting of Sir Richard's story was going rather well (or so I thought, given how much I struggle with plotting!). Sir Richard (a Norman) was going to be sent to East Anglia to deal with Saxons intent on overthrowing King William. But then I came across Richard Fletcher's book, Bloodfeud - Murder and Revenge in Anglo-Saxon England and all my plans fell apart. I had heard about Saxon bloodfeuds and knew they could last for years, but hadn't realised that they could last for generations.

The idea of the bloodfeud gripped and wouldn't let go. So when Wulf informed me that it was he and not Sir Richard who was being sent to East Anglia, I realised it would be he who would be dealing with this particular rebel band.

The heroine, Lady Erica, is the daughter of a Saxon thane killed by the Normans. She and her father's housecarls are dedicated to overthrowing King Williams’ regime. Erica knows that their cause would be strengthened if she could only persuade her men to unite with another band of Saxon rebels, but at once she runs into difficulties because of a long standing bloodfeud with the other Saxons. Initially, her men dismiss her idea out of hand.

But Lady Erica is very determined…

Here's the cover blurb for His Captive Lady, which is published by Mills and Boon in April: 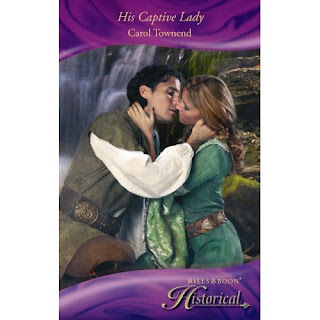 Captured by the Warrior!

Lady Erica had tried to bring peace to her people, so that they could join forces against the Normans. Instead she became captive to the Saxon warrior, Saewulf Brader!

Wulf was, in truth, a Norman captain spying on the enemy. Chaste yet fearless Lady Erica wasn’t part of his plan. Her beauty was as disarming as it was captivating, but Wulf knew that once she discovered his deception, their fragile bond of trust would be destroyed…

Welcome Carol, a fascinating post but no less than I would expect from one of my favourie historical writers. I loved the first two Wessex Weddings novels and look forward to reading His Captive Lady. You accurately bring the era alive with strong memorable characters and a compelling romance to keep you hooked.

Very interesting. Thank you so much for sharing.

I love Winchester, and visited often when my mother lived in Andover. So much history there and in the surrounding area. I can't wait to read your book. Such an interesting period of English history.

Hi Kate,
Your kind remarks have made my day!
Best wishes
Carol

Hello Kim and Ann,
Yes, Winchester is one of those places. Everytime we go we discover something new about it!
Best wishes
Carol

The castle picture is gorgeous. I can see where you can get inspired by such surroundings.

Lovely picture of Carcassonne which is one of my all-time favourite places. I first visited it as a student in France (many, many years ago!!) and then again on my honeymoon. It absolutely drips history, don't you agree?

Your new book sounds fascinating. Not surprising, with your love of the period. Hope it sells in shedloads!

Hi Morgan,
A good castle is certainly inspiring and Carcassonne is one of the best!
Best wishes
Carol

Hello Joanna,
A friend recommended we visit Carcassonne when we were some miles away in another part of France (the Gers), so I was slightly reluctant to go, as we should have been coming home! As you may imagine, I am really glad we made it. Fabulous!
Best wishes
Carol

Loved the post, Carol and can't wait to read the book, even if it isn't plotted the way you originally wanted it - these darned heroes do like to have their own way, don't they? Thankfully, our heroines can usually manage to control them!

Can't wait to meet Saewulf and Erica - I've loved all the other Wessex Weddings!

Hi. Went out and bought it today. I'm really looking forward to reading it. Caroline