In my recent release, Tantalizing Secrets, most of the action takes place in my home town of Leicester. I even set the button factory that Arabella owns in my childhood home, 10 Sanvey Gate. In our day it was a cobbler's shop, and my grandfather had bought the blacksmith's yard next door and the cafe behind us, to extend the living space. It was perfect for Arabella's factory and sheer delight to write about. The house and the ones near it aren't there any more, they were demolished to make way for St. Margaret's Way, but I'll let you into a secret - underneath the road is our old cellar, which still contains the huge machine that made the ancient cellar something like the Inferno.
This picture was taken in the 1940's, but is one of the few that shows the house, on the far right of the picture. 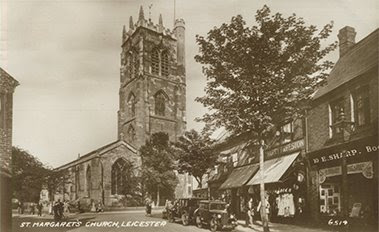 I based Arabella's house on the gem of a manor house, Belgrave Hall, which is now in the city but in Georgian times lay in the countryside outside the city wall. It's still there, but has been refurbished to reflect the Victorian occupants, instead of the earlier Georgian, which is how I remember it. The gardens are especially beautiful, and they house ghosts, famously caught on film. I think TAPS has been there! But if I could choose a house to live in, it would be something like that, not too large, not too small. Perfect.
If you want to buy Tantalizing Secrets, go here:
http://www.mybookstoreandmore.com/shop/product.da/tantalizing-secrets

Posted by lynneconnolly at 1:43 PM