The Ghosts of Neddingfield Hall 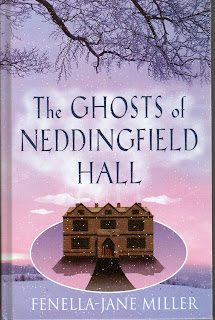 The LP edition of The Ghosts of Neddingfield Hall was released this month - it's classified as "romantic suspense". I rather like the direction the publishers are going with my latest covers. What do you think?
I have "Google alert" on my book titles and name, it's fascinating to see where books end up. I discovered yesterday that they hold five different titles in Freemantle library and that my Jane Austen retelling, "Miss Bennet and Mr Bingley" is listed on an American blog as a favourite read.
I thought you might be interested to know what went on in the vegetable garden of the rich and well-to-do.
February
Sow small salading, radishes, onions, parsley, spinach, lettuce, peas, beans, cabbage, cauliflower, carrots, parsnips, fennel,&c. The cucumber and melon plants raised last month, should be transplanted about the middle of this into new hotbeds. The ground should be prepared for planting asparagus next month.

I imagine that all this planting was done under glass, unless they had a much milder February back then, or maybe they were unbothered by sleet, snow, and freezing horizontal rain. I've not even been in the kitchen garden this year!
Fenella Miller
www.fenllajmiller.co.uk
Two Gentlemen From London -out now - in libraries in the UK.
Posted by Historical Romance Author at 7:47 AM

Gorgeous cover, Fenella! It's really pretty and intriguing at the same time. Congratulations!

But damn, I completely forgot to raise my melon and cucumber plants last month. Ah well.

オテモヤン said...
This comment has been removed by a blog administrator.
7:13 PM

We only tried to grow melons once and they looked like little green marbles.
Things were bigger and better in them olden days!