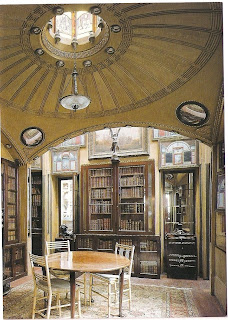 How to describe the Sir John Soane’s Museum in Lincoln’s Inn Fields, London? Aladdin’s cave? A Time Travel experience? A Gothic extravaganza? It is all of these and more – and an absolute treasure trove for a 19th century historical novelist.

When Soane, one of our finest architects, died in 1837, he left his house and collection to the nation on condition that they remained as he left them. As the house was both office and home, we have a sort of time warp of how Soane actually lived.

His home is quirky in the extreme, from the vibrant Pompeian red walls of the library with its hanging arches placed in front of mirrors just underneath the ceiling to trick the eye into thinking there’s space behind, to the sophisticated sulphur-yellow drawing-room and the eerie Monk’s parlour. One of the most fascinating things about the rooms is how they’re lit. Almost every wall is covered from floor to ceiling with either paintings or architectural features from his collection, which leaves little room for windows. Soane’s ingenious solutions include high windows immediately under the ceiling, or even in the ceiling itself. The breakfast room, for example, has a saucer dome ceiling with a lantern window in the centre.

The basement is a hotch-potch of sculpture, ranging from an Egyptian sarcophagus to statues, sections of cornice, rosettes, bas reliefs; anything interesting that took his fancy. There is a picture gallery at each end, one of which contains his superb collection of Hogarths. Heaven knows what Mrs Soane made of it all. It must have been like living inside a Gothic novel.

I particularly love Soane’s tiny study with his specially made desk with a top which slides out, and his dressing-room beyond with the original wash basin, together with a mahogany-cased pump with a handle to bring the water up from the well.

In the museum shop, I pounced on a copiously illustrated book The Soanes at Home by the museum archivist, Susan Palmer, which examines the Soanes’ domestic life in fascinating detail: where the servants slept and what they did, the household bills, what the washing arrangements were and so on.

This house is guaranteed to inspire you! And it’s free, too. www.soane.org.uk

Elizabeth Hawksley
Posted by Historical Romance Author at 1:00 AM

I love Sir John Soane's house too, Elizabeth. His 'study' reminds me of how people nowadays fit their computer area into the space under the stairs. And the way all those panels unfold to show layers of paintings is so clever!

Funnily enough, I almost like the upstairs drawing room the best. It seems to me to be definitely Mrs Soane's room, and it is as if she is saying "Do what you like with the rest of the house, but leave me this one room uncluttered and elegant, please."

Very envious of your book. Haven't seen that one there before.

This is one of mny favourite places in London - so atmospheric and evocative and stuffed full of treasures. I adore the spooky Monk's Parlour where Sir John and his friends could play at being Gothick

Fascinating! Another reason to go back to London one day ... :)

Ooooh can't wait to visit Sir John's house! It's onmy to do list, but of course things keep getting in the way. Your post has inspired me to make more effort, Elizabeth!

You might be amused to know that this blog is now in the Sir John Soane Museum press cuttings! I've just heard from the archivist, Sue Palmer.

Thanks for posting this information for those of us who can't get across the pond to see it.

Thanks for this amazing post and blog! In fact, I found it so interesting that I thought the readers of my website (LandingPadLondon.com) would benefit from your wisdom. I've quoted you on this page: http://www.landingpadlondon.com/sir-john-soanes-museum/

Say, if you would be interested in contributing to LandingPadLondon, we're always looking for great writers like yourself. Get in touch either via my blog or the site.

Thank you for a peek inside a home otherwise unavailable to me. I have been fortunate enough to visit several manor homes and chateaux and am always fascinated to see the way people live/lived. I love to dream about what life would be to live in such a home, like Mellerstain in Scotland or Chateau Chenonceau in France.

When I win the lottery or finally sell that blockbuster novel, I think I would like to replicate some of the rooms I have seen. I would start with a library like this one:

(As a fellow writer, I thought you might like to see some of the most amazing personaly libraries in the world. Ah to dream!)

Allow me to present myself: I am Léo, trainnee for the French travel guide collection: Seriousguide
Seriousguide are collaborative travel guides, indeed the information they provide comes from personal travellers experiences related on our website: www.seriousguide.fr
The last issues we published are Lisbon, Le monde à Paris and Barcelona. Our next guide is on London.
Our website is opened and travels published by Internet users represent an essential information for our printed guides.
However, we also notice interesting contains from others blogs.
That’s why we pre-select the Sir John Soane’s museum in London that you seemed to have enjoy a lot. So we sent one of our correspondents on the spot to check out every details we needed to publish it in our London Seriousguide.
If we decide to keep this activity for our guide, we would like to quote your pseudonym as our first source for this activity.
I want to emphasis on the fact that we are not going to use the text you wrote for your blog, but we want to mention you since it’s thanks to you that we found this interesting information.
If you agree, could you please send me your answer by email at the following address: documentation[at]seriousguide.fr?
You can also create your profile on www.seriousguide.fr in order to describe your travels and be informed about our publications.
Best regards,
Léo