The Novelty of Novels in Regency England

Ever wonder why writers like Byron, Coleridge and Scott wrote their long narratives such as Prisoner of Chillon, Rime of the Ancient Mariner (illustration right), The Lady of the Lake in verse? The answer may seem obvious: they were poets.

True. But there was more to it than meets the eye.

The fact was that poetry was respectable, but novels weren’t.

Jane Austen complains about the fate of novelists in Northanger Abbey:
Although our productions have afforded more extensive and unaffected pleasure than those of any other literary corporation in the world, no species of composition has been so much decried. From pride, ignorance, or fashion, our foes are almost as many as our readers. And while the abilities of the nine-hundredth abridger of the History of England, or of the man who collects and publishes in a volume some dozen lines of Milton, Pope, and Prior, with a paper from the Spectator, and a chapter from Sterne, are eulogized by a thousand pens -- there seems almost a general wish of decrying the capacity and undervaluing the labour of the novelist, and of slighting the performances which have only genius, wit, and taste to recommend them. "I am no novel-reader -- I seldom look into novels -- Do not imagine that I often read novels -- It is really very well for a novel." Such is the common cant. "And what are you reading, Miss -- ?" "Oh! It is only a novel!" replies the young lady, while she lays down her book with affected indifference, or momentary shame. (NA, Chapter 5)

To confirm this, the worldly John Thorpe dismisses Catherine Moreland’s novel reading in much the same way. When she asks him if he’d read Udolpho, he replies:

"Udolpho! Oh, Lord! Not I; I never read novels; I have something else to do."
Catherine, humbled and ashamed, was going to apologize for her question, but he prevented her by saying, "Novels are all so full of nonsense and stuff; there has not been a tolerably decent one come out since Tom Jones, except The Monk; I read that t'other day; but as for all the others, they are the stupidest things in creation."

were thriving on the sensationalist success of these new novels, it was the poets that received the attention. No novelist of the time received the fame and notoriety of Lord Byron, though of course this was partly due to his Bad Boy image. The majority of novelists were women, which partly accounts for the condescention with which the novels were treated. Note that Thorpe cites only male novelists as worthy of interest. But beyond that, the novel was still in its infancy. It was struggling to break into the mainstream, which was still very much dominated by poetry. It’s hard for us now to imagine a situation where, if you had a story to tell and wanted it to get the respect it deserved, you were expected to write it in verse. The novel only really came into its own in Victorian England. 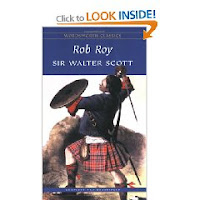 An important departure from the norm was Sir Walter Scott. Even though he is now rembered much better for novels such as Rob Roy and Ivanhoe than for his poems, he almost didn’t produce any novels. Later on in his life he wrote about his long struggle and uncertainty before finally taking the plunge and moving from poetic narratives to novels. Fortunately, his first novel Waverley, published in 1814, became an instant success, though, very significantly, he published it anonymously. He continued to use various pen names for his novels for several years, even though people knew that he was the writer.

In her usual caustic way, Jane Austen had this to say about his decision:

Walter Scott has no business to write novels, especially good ones -- It is not fair. He has Fame and Profit enough as a Poet, and should not be taking the bread out of other people's mouths -- I do not like him, and do not mean to like Waverley if I can help it -- but fear I must' (letter, September 1814).

Waverley plays a role in my forthcoming novel, The Darcy Cousins. In a scene in the novel, Georgiana Darcy and her cousin Clarissa go on a much anticipated outing to Waverley Abbey, which was believed to be the inspiration for Waverley. 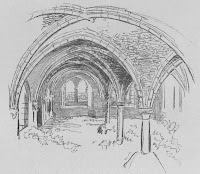 The outing provides a bit of a reality check to Georgiana, whose expectations were just a bit too high. Georgiana makes a sketch of the Abbey. I would think it was quite similar to the one above, since we know from Caroline Bingley that Darcy's sister was very accomplished.
The Darcy Cousins will be released Feb 28, 2009.

Monica Fairview
Posted by Historical Romance Author at 6:14 AM

I've always loved that Jane Austen letter, Monica. It brings her to life, doesn't it?

As for the intelligentsia decrying novels - nothing new there, then.

A really interesting post Monica - Good Luck with the new book, it sounds like a brilliant read!

Since we write historical AND romantic novels we owe a debt to both Austen and Scott! Interesting post, Monica - good luck with the new book.

Melinda -- yes, I thought it was faccinating that the two of them emerged at the same time.
Jan -- some things never change, do they?
This quote from her letters is so telling in so many ways. I love it.
Thank you, Jane, for your kind words.