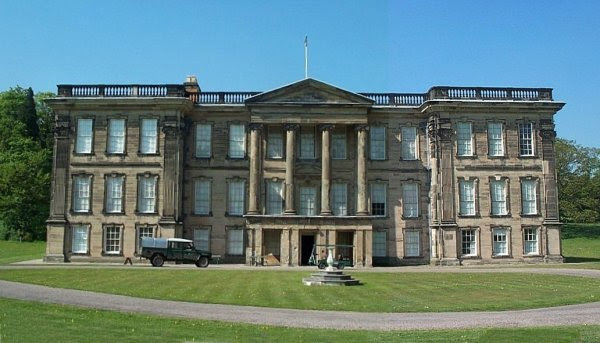 When I was little, my parents visited a different place every weekend. Usually a great country house, occasionally a historic village or town, sometimes a battlefield. We had a small family business and getting away for a longer stretch of time was often problematic.
So I saw a lot of country houses. My mother collected the guidebooks. I never thought the memories and the collections of guidebooks would be so useful. Now I visit them myself, take lots of photos, and try to “get” the atmosphere, that ethereal something that makes visiting the places so special.

When I wrote “Yorkshire,” the house I would use was firmly in my mind, in fact, it’s one of the rare occasions when the house demanded a story. This was Calke Abbey, which I visited just after it was opened to the public.
The history of Calke Abbey, in North Derbyshire, is a fascinating one, and not one that we see very often. The family, the Harpur-Crewes, never rose above the rank of baronet, but at one time mixed with the greatest in the land. One of the family’s members was a lady in waiting at Court, and on her marriage, received the gift of a magnificent State Bed. It never made it out of its boxes.
One of the baronets married below his class, which proved a severe problem to the family’s fortunes. Even that gave me ideas for books. The social network of the eighteenth century oligarchy was much more complex and close-knit than many historical novels give credence for, and marrying for love and love only could prove a family’s downfall.
The Harpur-Crewes became more and more eccentric, but hung on to the house until 1981, when the owner’s sudden death brought heavy and unexpected death duties that they couldn’t afford. So the property was gifted to the National Trust.
The National Trust originally took Calke because of the the grounds. The Harpur-Crewes were enthusiastic naturalists and collectors, and as a result the estate was a treasure trove of rare species. But when they saw the house, that became a priority. It was in an appalling state of disrepair, and the Harpur-Crewes had moved through it, abandoning rooms together with its contents as they became uninhabitalbe. At the time of the last owner’s death, he was living out of the kitchen.
The NT decided to preserve the house as it was, as an example of the way the great country houses became white elephants and fell into decay over the course of the twentieth century. So the repairs were careful to preserve the mould in the rooms, the way belongings, useless and valuable, were thrown into the rooms. That is, with the exception of the State Bed which is now, for the first time, put together and preserved under glass. It’s an amazing sight. Most State Beds are faded and tattered, but this beauty is pristine and of the highest quality.
When you walk into this place, it feels abandoned and sad. Even though most of the damp is eliminated now, you can still feel it clinging in the air, a kind of elemental ghost. The nursery is shocking, because toys have been dumped there, some of them museum-worthy. Before Calke, the National Trust preserved and restored houses to their former glory, so very few people outside the owners saw a house as it was. It’s like Tutenkhamen’s tomb or Sleeping Beauty’s castle, a once-great place in complete disarray, as if someone had just abandoned it and walked out. Which is more or less what happened.
How could I not set a book there? So Rose arrives at Hareton Abbey in Yorkshire (I moved Calke a few miles – it’s in Derbyshire, the next county down) expecting a society gathering, only to find the place in filthy disarray, a very few rooms readied for occupation and the Kerres the only other family invited. They are as put out as Rose’s family, the Golightlys, and it’s there that Richard and Rose begin their romance. A romance I haven’t finished writing about yet.
The official site for Calke Abbey is here:
http://www.nationaltrust.org.uk/main/w-calkeabbey
And if you want to check out “Yorkshire,” it’s here:
http://www.mybookstoreandmore.com/shop/product.da/yorkshire for the ebook, and here http://www.mybookstoreandmore.com/shop/product.da/p-yorkshire for print.

Posted by lynneconnolly at 2:21 PM

Amazing, Lynne! Hard to believe anyone would want to preserve mold, but there you are! It definitely sounds like the house deserves a story.

Treasures of the Trust on HD Theater is one of my favorite shows. The episode they did on Calke Abbey was fascinating! Weren't the residents collectors of animal specimens under glass? I seem to remember quite a bit of taxidermy in all of the clutter. I think that's the same house...

Either way, your story sounds intriguing. Thanks for sharing.

I love the idea of Rose arriving at an old house where everything is covered with cobwebs and in need of some serious tlc. I think the 'doing up old houses' thing must be deep in the female psyche -it's always fascinating.

Please hurry up and finish it!

I love the tagline on your web site: "This series is addictive. Passion and murder are a potent mix." Brilliant!

Yes, the stuffed animals are pretty gruesome. I want to go back one day. So many houses, so little time!

Calke Abbey is actually in South Derbyshire. The great stately home in North Derbyshire is Chatsworth House. It's not National Trust but I think it is known around the world.
Each is spectacular but they could not be more different form each other. (I prefer Calke Abbey myself).