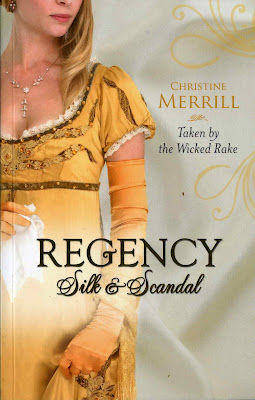 In this month's guest spot I'm delighted to welcome Christine Merrill author of the second and final books in the Regency Silk and Scandal continuity. This month Taken by the Wicked Rake concludes the eight-book series and reveals the truth about the mysteries that have threaded through the other seven books. The villain gets his just desserts and Verity Carlow, younger sister of my two heroes, finds her true love.

Christine had to do a considerable amount of research into Romany life and lore for this book, right down to the horses used. But heroes are allowed to be slightly different - aren't they? Over to Christine -
* * *
When we continuistas had to choose a horse for my Gypsy hero, Stephano Beshaley, I remember there was some talk amongst us about the best type. I can’t remember who actually made the decision. Possibly me. I know I was all for it when he got the heroic standard, big, black horse.
I really don’t know much about horses, despite the fact that I live in the country. They walk by the house sometimes. They may be invited into the yard to eat apples. We have boarded other people’s horses, since we have an empty pasture. I have managed to get through the experience without actually learning anything, other than that I like to look out the window at horses. They are pretty from a distance. They are even prettier if they have owners coming daily to feed, water and brush them.
My husband had horses as a teen, and never wants to own another one. He sees them as things that require continual maintenance, and that take a deep breath and blow out their guts when it is time to be ridden, making it impossible to get the saddle properly cinched. And then they laugh when the saddle slips and the rider falls off. And then they run away. And you have to chase them…

Though we started dating in high school, I never got to meet his horses. When I learned they existed, I behaved like a typical teenage girl, and asked if we could go riding.
He said, “No. They don’t like to be ridden.” Apparently, the Merrill horses were only decorative.
It has been thirty years. He bears a grudge. No horses for us.

But I am writing historicals. And all of my heroes should have Andalusians. As stated, I know nothing at all about horses. But my first response, on seeing an Andalusian, was “Oh, God, I want a horse!” They are big and glossy, with flowing hair like an equine Fabio, and extremely proud, arched necks.
I think I can justify them as available and appropriate to the period. They are a centuries old breed from the Iberian Peninsula, and so would be appropriate for any returning war heroes. Regency men had a lot of time on their hands, and a good knowledge of horse flesh. Since Stephano is part English, a world traveler, and definitely of a theatrical nature, I think he would want a showy, good looking, slightly exotic horse. 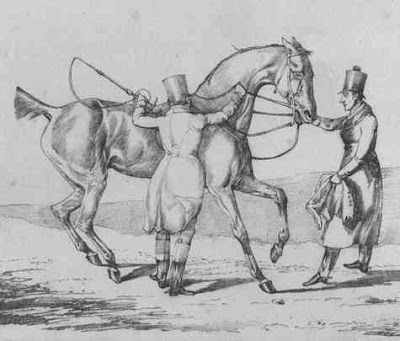 It would be like having a Ferrari with legs.

But he is also a Gypsy. There would have been a much better horse, considering the fact that I gave Stephano a vardo wagon. I never even considered the more appropriate Gypsy Cob. This is a breed of uncertain bloodlines, but firmly based in the UK, and bred by the Romany. They are piebald or tobiano, with shaggy, feathered legs and are big boned and ideal for pulling wagons. They will graze on what they can find. And apparently, these horses are also sweet tempered, since the Romany sold any horses that weren’t, and bred only the nice ones.
These horses are also called Gypsy vanners. Probably because they pull vans and don’t spook or get tired. If an Andalusian is a Ferrari, a Cob is definitely a station wagon.

There is no alpha hero in the history of romance that would choose a station wagon over a sports car. I rest my case, with apologies to real Gypsy Horses everywhere.
* * *
I found this lovely print by Henry Alken above that is probably the sort of Ferrari horse than Stephano would have liked, although I am sure he would not have had the tail docked.
Louise Allen
Posted by Historical Romance Author at 5:00 AM

Chortling here at your description of your husband's crafty horse putting one over on anyone trying to ride him!
If I ever have to describe a horse in any of my stories, I do try to give them personalities, based on anecdotes shared with me by "horsey" people.
I think Stephano would definitely have had more than one horse...a nice reliable one for pulling his vardo - and the ferrari on legs for when he wants to flaunt his wealth outside the encampment.