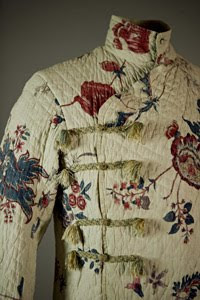 A very Happy New Year to everyone! 2011 is a special year for all Regency authors and readers as it is the bicentenary of the start of the Regency period. In late 1810, George III was once again overcome by illness, this time brought on by the death of his daughter Princess Amelia. Discussions began in parliament on the establishment of a Regency and in February 1811 the Regency Act was passed. I've been searching around for any events planned to commemorate the passing of the Regency Act and have found only one so far - a splendid exhibition at the Royal Pavilion in Brighton called Dress for Excess: Fashion in Regency England. There's a link here. Not only will George's enormous breeches be on display, so will his coronation robe and many other items of male and female fashion from the period. I'm looking forward to the exhibition very much. There's also an event about "The Romantic Regency Shirt" that sounds rather fun!
I hope there may also be some events in Bath, Cheltenham and other "Regency" towns. What do you think is an appropriate way to celebrate the Regency? I'm thinking about a sumptuous eight course dinner like the one served for the Prince Regent and Tsar Nicholas at the Royal Pavilion in 1817...
Posted by Nicola Cornick at 10:14 AM

The exhibition 'Dress to Excess' at the Brighton Pavilion sounds terrific, Nicola. And the Pavilion itself is always worth a visit. When is it on?

Talking of Regency costume, the Museum of London has a gentleman's suit made by Weston - showing all the quiet elegance one would expect.

In 1997, the Museum of London had a fantastic exhibition called 'In Royal Fashion' which showed the clothes of Princess Charlotte and Queen Victoria. Princess Charlotte's clothes (wedding dress, court dress and various others) were particularly interesting - and rarely seen.

There was an excellent catalogue, too. In it was a diary extract in which Charlotte wrote that she was reading 'Sense and Sensibility' and identifying madly with Marianne!

Certainly sounds like it will be a wonderful exhibition- only wish I could get to see it, but sadly I can't.
It's a shame these fascinating exhibitions don't get a chance to move around the country so more people have an opportunity to see them.

Many thanks for posting about this Nicola. I'll have to make an excuse for a trip to Brighton. It's about 3 hours' drive, but it sounds too good to miss.

Your 8 course dinner would be terrific. I'd also like to see an exhibition of the progress of the scandalous prints through the perod of the Regency. But for me there would have to be quite a lot of explanation as well, about who was who and why they were pilloried. I've read lots about the Regency, but I stil keep coming across new stuff.

The exhibition starts next month, Elizabeth, and runs for a year. I agree with Carol - it would be great if the exhibition travelled around but I'm determined to get there even though Brighton is a bit of a hike from here too. Perhaps we could put together a party, Joanna?

Elizabeth, the Royal Fashion exhibition sounds fascinating. I would love to have seen Princess Charlotte's clothes.

If you like Regency costume, you might like Penelope Byrde's 'Jane Austen Fashion' ISBN 978-0-9539561-3-5
Although don't have much about dress in them, in private life JA was a fashion fanatic, and her letters were full of visits to dressmakers etc. A fun read.