An excellent start to the Austen year

This year is a very special one for all lovers of Jane Austen as it's the bicentennial of Sense and Sensibility. Little did anyone know in 1811 that the quiet publication of Austen's first novel would start a centuries long, worldwide love affair with her work. This love affair is often attributed to film and TV success, but Austen's novels had already been loved for a century (more or less) before cinema and TV were invented.

Reading her books, it's easy to see why. They're not only extremely well written, with realistic romances and full of social commentary, they're also extremely funny.

One of the funniest is Northanger Abbey. I keep waiting for someone to update it in the manner of Clueless, because the story of a naive teenager being carried away by Gothic novels is as recognisable today as it was in the early nineteenth century.

In the absence of such a gem, we have some Northanger Abbey based fiction coming up this year. One book is my own Henry Tilney's Diary, which is out in May, but before that there is Margaret C Sullivan's brilliant novel, There Must be Murder. 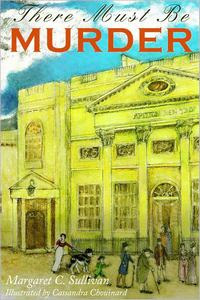 Henry and Catherine Tilney are content with their married life: a comfortable parsonage, their dogs, and one another. The idea of returning to Bath a year after they first met there seems like it can only add to their happiness; but Catherine finds that Bath still carries social dangers that she must learn to navigate. What is the nature of Henry's past relationship with a beautiful young woman? Why is a rakish baronet paying Catherine such particular attention? Is General Tilney going to marry the woman known in Bath as The Merry Widow—and what did she have to do with her husband's death? And will Henry ever be able to keep his Newfoundland out of the river?

Revisit the winter pleasures of Georgian Bath with your favorite characters from Jane Austen's hilarious Northanger Abbey, and prepare for a bit of romance, a bit of mystery, and a very nice story indeed!


My copy is already winging its way to me from Amazon
and I can't wait to read it. Not only is the story tempting, but it's beautifully illustrated by Cassandra Chouinard. If you follow the Amazon link and use the "look inside" facility, you can see some of the illustrations.

All in all, a very good start to the year!

I love Northanger Abbey. When my daughter was about Catherine's age, I read her the episode in the Assembly Rooms where Catherine is desperately trying to avoid the obnoxious John Thorpe and, at the same time, hoping Henry Tilney will dance with her.

My daughter - who'd previously thought Jane Austen was 'boring' - actually fell off her chair laughing! I could see that she identified completely with Catherine and knew exactly what she was going through.

I can't tell you how much I enjoyed her reaction.

I read this online and thoroughly enjoyed it!