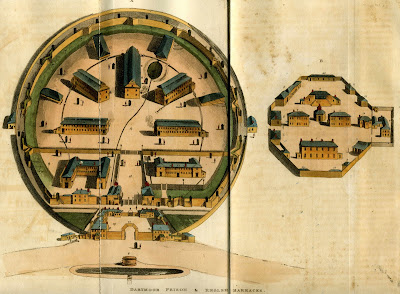 I was fascinated by the Time Team programme last year about the excavations at the Norman Cross Napoleonic prisoner of war camp. All that can be seen of that establishment now is a faint outline in aerial photographs and a monument by the side of the A1.

But there was another camp that has survived, although in a very different form - Dartmoor Prison.
In September 1810 Ackermann's Repository printed this double page spread of the new prison (erected at a cost of £200,000)with a lengthy article "to pay a just tribute of applause to the judicious regulations, which ensure kind treatment and humane attention to the unfortunate victims of war." Whether the 6,000 prisoners who could be incarcerated here would have viewed it in quite that light is open to doubt!

"Perhaps a more healthy spot might have been selected", the article concludes, having reviewed the climate of Dartmoor, but otherwise the tone is of considerable admiration. Bedding is aired daily "when the weather allows", the hospital "is kept in the most exact state of cleanliness and order" and "every patient, previous to admission, undergoes a proper ablution in the bath." Whether the other prisoners ever managed to have a bath is not stated.

"The prisoners of war...wear a yellow uniform, occasionally striped with blue. So conspicuous and universal a dress renders their escape impracticable, supposing them at large beyond the prison walls."

The prisoners elected their own representatives to meet with the prison authorities to discuss problems with rations or accommodation and "a well supplied daily market is held in the agent's square where provisons of every kind are sold at a moderate price." It was presumably here that the prisoners would sell the handywork that they produced from bone and other scraps - and which now fetch such high prices as antiques!

The smaller enclosure to the right of the picture is the barracks which held 5-600 hundred men and their officers with Plymouth regiments taking two month turns of duty at the prison. 180 soldiers were on duty inside the prison itself at all times.

The author of the article considers that they have "a severe duty" but this was alieviated for the officers by invitations to Tor Royal, the seat of Thomas Tyrwhitt, Esq. MP for Plymouth who lived a mile and a half from the barracks. There they might expect "an amenity of manners, suavity of disposition, and inhaustible fund of anecdote and a hearty welcome to crown the hospitable board."

At the termination of the war...it is said to be in contemplation to convert this vast building into a receptacle for convicts, whose labours on the moor will prove highly important and beneficial to the nation and an incredible saving in the enormous expense incurred both at home and in transportation."
Posted by Historical Romance Author at 5:00 AM

Fascinating post, Nicola. I was so upset to miss the Time Team programme on Norman Cross.

And, of course, having lots of French officers incarcerated on English soil provides historical romance writers with any number of interesting possibilities!

Ooh, this wasn't my post (is it one of Louise's?) but I was fascinated too. I loved the Time Team programme. I did a lot of research on Napoleonic Prisoners of War for my book, One Wicked Sin, which came out in the US in November and will be pubbed in the UK in July. The topic was totally engrossing and although I was concentrating more on the parole town element I did look into the building of prisons like Dartmoor and the use of prison hulks. As you say, Elizabeth, the presence of French (and other enemy) officers on English soil gives rise to any number of interesting romantic possibilities!