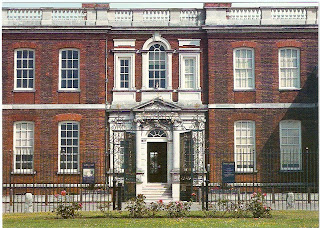 I’ve just given the Annual Chesterfield Lecture to the Friends of The Ranger’s House, Blackheath, London. It’s the first time I’ve been asked to talk to such a knowledgeable group in such a classy venue – a superb early 18th century red brick mansion, once the home of Lord Chesterfield, statesman, wit and letter-writer. In 1728, he became British Ambassador in The Hague. Whilst there, he acquired a superb collection of Dutch paintings, and then had to add a wing onto the house in order to show them off them.
First we had a delicious buffet dinner, provided by the Friends, in the basement of the house and then we trooped upstairs to the crimson gallery – not forgetting to put on our coats – there is no central heating. Well, the Friends put on their coats and, in some cases, their scarves, but I felt that, as lecturer, I couldn’t go that far. I hoped that the adrenalin would keep me warm. 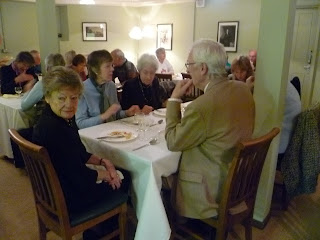 The crimson silk gallery, where I was speaking, was magnificent with its fabulous paintings, glittering chandeliers, superb plasterwork, and a couple of classical nude marble statues flanking me on either side.
The talk I was giving was one I’d given before – how I became an historical novelist and it included snippets from my juvenilia – the six novels I wrote between the ages of ten and sixteen. I knew that Lord Chesterfield had also written: his famous letters to his illegitimate son are a mixture of worldly-wise pieces of advice and cynical and witty observations on the world. Surely they could provide me with a quotation to act as an introduction to my talk. After all, I was giving the Annual Chesterfield lecture, I felt I owed him a compliment or two.

What did he have to say on women, I wondered. 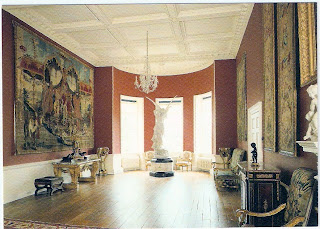 This is what I found: Women, then, are only children of a larger growth: they have an entertaining tattle, and sometimes wit; but for solid reasoning good sense, I never knew in all my life one that had it, or who reasoned or acted consequentially for four and twenty hours together.
He goes on to advise his son: A man of sense only trifles with them, plays with them, humours and flatters them … but he neither consults them about, nor trusts them with, serious matters.

Hm. No, I decided, I would not be paying Lord Chesterfield a graceful compliment. I would give him a courteous but neutral mention and hope that his portrait in the next room didn’t crash to the ground in the middle of my talk in horror at hearing a mere female giving a lecture in his name.

Fortunately, the talk went very well and there were no untoward intimations of
spectral disapproval.

What a gorgeous house, Elizabeth, and congratulations on being invited to give the lecture. Though Lord Chesterfield's opinions say more about him and male attitudes of the period than about the women he so casually denigrates, they still rankle.

You're so right, Jane. I was FURIOUS! I would have loved to have told the Friends of the Ranger's house exactly what my opinion of Lord C. actually was! I consoled myself with the thought that they were all intelligent people who would probably agree with me, anyway.