When looking for dispacement activity to avoid doing the housework I like to thumb through Practical Hints to Young Females on the Duties of a Wife, A Mother And a Mistress of a Family by Mrs Taylor of Ongar. My edition is the 5th, dated 1815, so she appears to have had good sales.
The tone is set by the frontispiece showing an elegantly, but modestly, dressed mother at work on her sewing and encouraging her small child to read a book. 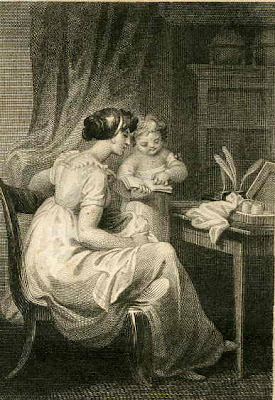 Mrs Taylor considers education to be a good thing for females but warns Many a female, because she has been educated at a bording-school, returns home, not to assist her mother, but to support her pretensions to gentility by idleness, dress, and dissipation.
Once a young lady has been fortunate enough to find herself a good husband she is reminded that When he vowed to take you for better or worse, he staked the happiness of his future life; a treasure for which the most ample portion is insufficient to compensate. 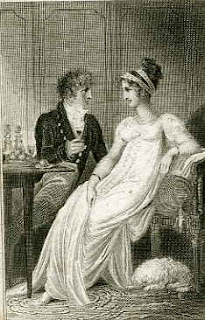 The young wife is warned that she may well have married expecting "uninterrupted felicity" but by degrees the discovery will be made that you have maried a mortal, and that the object of your affections is not entirely free from the infirmities of human nature.
The solution to any marital disharmony is to search one's own character and to realise one's own faults, thus learning to forgive your husband's. If he should be morose, fretful, or capricious, liable to sudden sallies, or the prey to constant irritability, the cure [is effected by] sweetness and the coolness of a reasonable mind. A wife must always contemplate her husband's virtues rather than his failings. 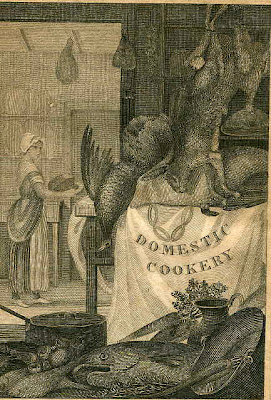 Of course, the main cause of maritial disharmony is money, so you must study to keep strictly within the household budget and note that much loss is sustained by purchasing articles of housekeeping in small quantities....Weekly payments are forcibly recommended in order to keep a close check on tradesmen's accounts.                                  Servants are a major cause of concern to any housewife and she must take note that A good servant can always find a good situation...nor ought those who have adopted the mistaken economy of giving low wages...expect good service.                                                                    In every kitchen there ought to be a library...and nothing beyond the comprehension of kitchen readers be admitted.  The advice on managing servants appears quite enlightened with an emphasis on plenty of praise where it is due as well as a fair wage for the job. It is poor encouragement to a servant if she is invariably blamed for what is wrong and never praised for what is right. The old retainer must also be looked after and the inexperienced, young mistress of the household would do well to watch and learn from good domestic staff.
There is an entire chapter on the dangers of becoming a step-mother with a warning to decide, well before committing oneself to a widower and a father, whether one can love his children!
The final chapter is given over to advice to The Husband and he is told that it will serve his comfort best if his wife is allowed to run the home and has sufficient housekeeping allowance to do so - and he is reminded that it is important to regularly express affection and regard for his wife.
Now - I'm off to give the scullery maid a rise in pay and to admire my tall, handsome footmen.
Louise Allen
Posted by Historical Romance Author at 5:00 AM

I'm sorry to have picked up your interesting post rather late, Louise. Your Mrs Taylor of Ongar is, I'm pretty sure, the same person as the Ann Taylor about whom I blogged on May 22, 2010. I was writing about her 1817 novel 'Correspondence between a Mother and her Daughter at School', so the dates fit.

I do like it when separate pieces of research link up!