A Visit to Buscot Park

Last week I had the pleasure of visiting Buscot Park, a late Georgian mansion near Faringdon in Oxfordshire. I am planning to use Buscot as the inspiration for the country house in my next book and I was particularly interested in the internal layout and also in the furniture. Lord Faringdon, who still lives at Buscot, has a very fine collection of art, ceramics and Regency furniture on display in the house and it was fun to stroll through the rooms and see them as they would have been at the turn of the 19th century.
The original mansion and park at Buscot were built between 1780 and 1783 for Edward Loveden Loveden at a cost of of over twenty thousand pounds (about seven hundred and eighty thousand pounds in today's terms). The house was built by local crasftsmen using local materials but also incorporated so 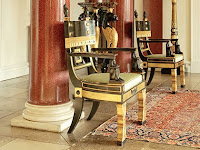 me recycling of slate and stone from other nearby mansions that were being pulled down at the time. The result was a grand house with nine bays, a double flight of stone steps and an impressive Orangery, all surrounded by a deer park and pleasure gardens with two lakes.
The Entrance Hall, with its stone flagged floor and porphyry scagliola pillars dates from 1780 and most of the furnishings are from the Regency period. It certainly creates an impression as you walk through the main door! A suite of a long couch and two armchairs in the Egyptian style that became fashionable after the Battle of the Nile was, to my eyes, completely over the top, made of ebony, painted with gilt and featuring large carved black lions! The suite was made by Thomas Hope, pioneer of regency furniture design, and the pieces are illustrated in his 1807 book Household furniture and interior decoration. A matching clock on an ebony stand towers four foot high. The hall also boasts an astonishing ornate gilt metal chandelier in the French fashion dating from about 1806 which is similar in design to those at St James's Palace.
The Dutch Room, one of the drawing rooms, contained an interesting piece of furniture in the shape of a small cabinet. Under the lid is a notice that reads: "Newly invented musical game dedicated to Princess Charlotte of Wales." Unfortunately we weren't allowed to play it! Strolling through Buscot's reception rooms, I could see how influential had been the taste of the Prince 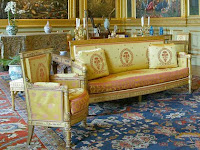 Regent in the different fashions in furniture throughout the period. There were the French fashions, the Egyptian fashion and furniture in the "antiquarian" style which the Regent also enjoyed. In the Drawing Room was a "Carlton House desk," named, according to Ackerman's Repository of Arts of 1809 - 28 "from having been first made for the August personage whose correct taste has so classically embellished that beautiful place."
One of the interesting things about Buscot House was that despite the size and the grand interiors it actually felt quite cosy. The bedrooms were comparatively small, which must have helped in terms of keeping them warm in winter. As I wandered through the interconnecting rooms downstairs I realised that in the Regency period even a large country house could be made to feel like a home.
Posted by Nicola Cornick at 9:17 AM

I was just thinking that none of it looked very cosy - and then came to your closing paragraphs. Interesting. Obviously somewhere that has to b seen in the flesh, so to speak.

It does look very grand though :)

Buscot Park sounds wonderful, and I love houses with Regency furniture. Another one to add to the now very long list!

I think you're right that it doesn't look at all cosy from the outside, Jan, and yet the interior and especially the upstairs felt really warm and intimate. Interesting that they were able to achieve that feel in such a great barn of a place!

Alison, a pleasure to add to your list. The Regency furniture is well worth a look and Lord Faringdon himself often welcomes the visitors - useful if you have questions about the collection!

I visited Buscot this summer, Nicola. It's a lovely house, one of my favourites. As you said in your write-up, it feels remarkably cosy considering its grand scale. I could manage to live there *g* The water garden walk is beautiful too.

I'm so pleased you enjoyed Buscot too, Elizabeth!

What a beautiful house! I can never get enough of visiting these grand places.

I have just discovered your wonderful blog and searched in vain for a way to follow it.
Please tell me where and how!