I'm absolutely thrilled that the UK paperback of Colonel Brandon's Diary is finally here. Its publication date was chosen to coincide with the bicentennial of Sense and Sensibility and it's a beautiful edition, I just love the cover. It's taken from the same portrait as the hardback cover, but it shows more of it, so that we see "Brandon" is holding "little Eliza" by the hand. 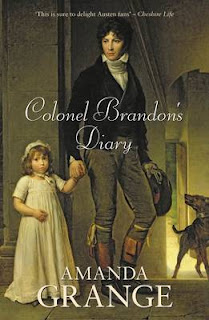 When I set out to write my retelling of Sense and Sensibility, I was intending to write Edward's diary, but as soon as I came across the short passage in which Brandon recounts his tragic past, I knew that his was the diary I had to write. From optimistic youth to devastated young man to bereaved adult - and then, miraculously to a man of hope and love again, courtesy of Marianne Dashwood - I loved every minute of writing his diary, and I hope you love reading it, too.
Here's a taster from the middle of the book, when Brandon challenges Willoughby to a duel.
The carriage pulled away. The horses’ hooves sounding strangely muted and the turning of the wheels was no more than a grating whisper as the carriage bumped over the cobbles.
‘This damnable fog,’ said Green, peering out of the window. ‘I hope it clears by the time we reach the heath or you will not be able to see each other, let alone fire.’
We were in luck. When we stepped out onto the heath we could see for twenty paces, enough for our business.

There was no sign of Willoughby’s carriage.
Ten minutes later Willoughby arrived, attended by two men who looked nervous, as well they might. They were dandies, not soldiers, and had probably never been seconds in their lives.
‘I will give him another chance to change his mind,’ said Green.
He went over to Willoughby, they had words, and Green returned, saying, ‘The duel is to go ahead. It is for you to choose the distance, Brandon.’
That done, the seconds met in the middle and loaded the pistols in each other’s presence to ensure fair play, then Green and Wareham returned to hand me my weapon.

He turned, too, his arm already raised. He rushed his shot, firing without taking proper aim, and the bullet went wide, so wide I did not even feel it pass. He blanched, and dropped his arm. I saw his knees begin to buckle. I lifted my arm. And then he turned and I thought that he would run. But the horrified look on the faces on his seconds curtailed his cowardice and he turned back towards me, white faced and trembling, turned sideways on to present as small a target as possible.
For Eliza, I thought.
I took aim.

But as I did so, I saw not Willoughby and not Eliza, but Marianne. I imagined her face as she heard that Willoughby was dead; I imagined her grief, and I was horrified, for, if she was still enamoured of him, she would not grieve easily or quietly, but would suffer with all the depth of her being. If I killed him, I would cause her great pain, and with her nature, it was a pain she would not be certain of overcoming. And so I raised my arm and fired into the air.
Willoughby fell to his knees, and had to be assisted to his feet by his seconds.
I walked over to him and looked at him in disgust.
‘You are not worth shooting,’ I said.

Then Green brought me my coat and we climbed into the carriage. It pulled away, jolting over the heath before turning on to the road.
We went back to Green and Wareham’s lodgings. By the time we reached them, a wind had sprung up and it had driven most of the fog away, revealing a cold, clean light as a pale sun broke through the clouds.
‘You deloped,’ said Wareham, as we went inside. ‘Why?’
‘Because there is another young woman caught in Willoughby’s toils,’ I said, as I took off my outdoor clothes and threw myself into a chair, ‘and I feared that, if I killed him, she would love him for ever.’


Colonel Brandon's Diary is in UK bookshops now, or you can order from The Book Depository which offers free worldwide postage and packing, as well as Amazon and other sellers.

I think Colonel Brandon is my favourite of your diaries, Amanda. Should be read as a companion-piece to Sense and Sensibility

Love the cover, Amanda. Good luck with the book