Something Old, Something New... 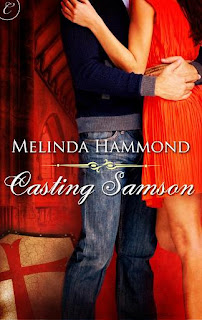 I think October is going to be a month os contradictions.  It has started with a wonderfu Indian summer - the weather here up on the hill has been hotter than anything we had during the summer months - and yet we are prepared for frosts, if not snow, by the end of the month.

And at the same time I received my advance copies of The Dangerous Lord Darrington in hardback, I am also gearing up for the launch of an e-book for Carina Press - Casting Samson. So I have in my hands the "old technology" of a printed book, and a hardback, at that, and on 17th October I will see a new book published using the very latest technology.  And who knows where this publishing revolution will end?

Casting Samson is my first Melinda Hammond novel for a long time, and it is in itself a contradiction. It is the story of a present day English village (think thatched cottages,a stream running by, old church and quaint characters) and its links to the past, to the Crusades and the Templars, in fact! I describe it as The Vicar of Dibley meets Ivanhoe, because it is part comedy, part serious but most definitely three love stories all intertwined.  I have added a short extract on my website, (www.melindahammond.com) so do take a look and let me know what you think of it. 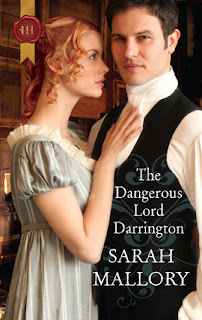 By contrast, The Dangerous Lord Darrington (which was published in North America last month) is another Sarah Mallory Regency romantic adventure  with a mysterious old house, a handsome hero, a beautiful heroine, secrets and scandal.

So, which one do I prefer?  An impossible question, the two stories are so different and I love them both, but as the saying goes - variety is the spice of life!

Wishing you luck at both ends of your spectrum! It will be interesting to see how they compare in sales and reader-feedback.

Casting Samson has an intriguing cover. I love the red!

Thanks, Jan. I love the red, too. Casting Samson is so different that I will be interested to know what reader's think.

Congratulations, Melinda- wishing you much success!