Today I'd like to welcome Beverley Eikli to the Historical and Regency Romance UK blog as my guest.  She is the author of three Regency novels, published by Robert Hale, but in a week's time her first Regency espionage romance, TheReluctant Bride, published by Choc Lit will be out in paperback.

Welcome Beverley!  Please tell us a bit about your new novel. 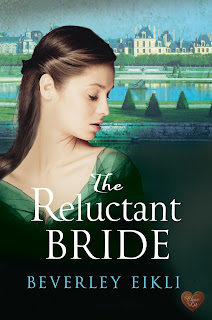 Thank you. Christina, it's lovely to be here!  The Reluctant Bride has had a long and convoluted history.  It was a simple 'marriage of convenience' story when it won the Romance Writers of New Zealand competition six years ago.  I then went on to publish three Regencies with Robert Hale, all the while researching the French Revolution and 'layering' The Reluctant Bride with a back story set during the September Massacres of 1792.

The pivotal, life-changing events for my hero, Angus, however, occur during the retreat to Corunna in 1809, though the actual book picks up four years later when Angus calls on the woman he's loved from afar to tell her that her fiancé has just been killed in battle.  The lie he tells her, in order to spare her pain, comes back to haunt him after he's made her his 'reluctant bride.'

The Regency period is obviously very popular – what drew you to this particular era?  And is it your favourite time in history?

I first wrote Georgian-set stories but the practicalities of publishing meant that it was easier to sell a Regency at the time.  You could say that now I love the transition between the two periods.  I find the shift in culture and attitudes from the mid 1700s to the early 1800s fascinating and I love to reflect that in the mindsets of my characters, depending on their ages.

I understand that you like so called Beta heroes, why is that and what is it about them you find appealing?  (As you know, I prefer Alpha heroes myself)
Yes, you and your Alpha heroes, Christina :-)  Having said that, one of my most successful books featured an alpha hero.  I think Angus in The Reluctant Bride is a bit of both.  As a returning war hero he's proved incredibly courageous.  He's also brooding and burdened by events which forced his hand, yet he will do whatever it takes to win Emily, his emotionally distant new wife.  He's an alpha hero in that he sets about doing this with honour and action – but he's very beta when he treats her with more understanding than she deserves as she’s so stubbornly resistant to his overtures.  One of the challenges I had was showing Emily in a sympathetic light when she's so unkind to Angus to begin with.  But she's just lost her beloved fiancé and the main events in the story span eight months, which isn't terribly long to grieve.

Who is your favourite fictional hero?

Jane Austen or Georgette Heyer – which of these two authors do you enjoy the most and why?

Very hard question.  I've read all of them and loved all of them.  I've always wondered, though, why there are so many BBC Jane Austen productions but no television adaptations of Georgette Heyer novels.  Unless we just don't get them here in Australia.

Have you ever tasted ratafia or macaroons?  And do you like the kind of research where you try things out for yourself?

I've never tasted ratafia but I love macaroons and in fact am going to try my first batch this weekend.  Australians love their pavlova and I always have lots of frozen egg-white read to whip one up in a flash.  I only discovered a few days ago that macaroons use egg whites.

When it comes to research, though, I can't resist making period costumes from authentic patterns.  Earlier this year I made some 1780s half boned stays and panniers and chemise to go under my 1780s polonaise, together with a Regency gown for my 'History Through Costume Talks'.  A few weeks ago I made my two daughters a couple of pretty 1850s dresses and capes for a 'Christmas in July' event we went to at nearby Sovereign Hill which recreates the gold rush era of the 1850s.

Blurb for The Reluctant Bride:-
Can honour and action banish the shadows of old sins?
Emily Micklen has no option after the death of her loving fiancé, Jack, but to marry the scarred, taciturn, soldier who represents her only escape from destitution.

Major Angus McCartney is tormented by the reproachful slate-grey eyes of two strikingly similar women: Jessamine, his dead mistress, and Emily, the unobtainable beauty who is now his reluctant bride.

Emily’s loyalty to Jack’s memory is matched only by Angus’s determination to atone for the past and win his wife with honour and action.  As Napoleon cuts a swathe across Europe, Angus is sent to France on a mission of national security, forcing Emily to confront both her allegiance to Jack and her traitorous half-French family.
Angus and Emily may find love, but will the secrets they uncover divide them forever?

Many thanks for taking the time to be my guest, Beverley!

Thank you, Christina, it was a pleasure being here.

Christina x
www.christinacourtenay.com
Posted by Historical Romance Author at 12:09 AM

Oh my gosh Beverley, I'm so glad you blogged - I can finally get a taster for what is to come. I'm just dying to read The Reluctant Bride! I have all your Hale books, and LOVE them to bits, so I'm counting down to the September release date for The Reluctant Bride. I'm actualy a little grumpy at Choc Lit for their limited e-book release... I don't have a kindle or an apple device... so I'm stuck waiting for the book! I would have loved to e-read it on my sony - ahead of the books launch... still the anticipation is building - I'm going to stay in bed ALL weekend when it's released and just drink tea and lose myself in the french revolution.
Thank you for all your lovely hero's and heroine's and the amazing journeys that have bought them together :)
cheers,
Nina

I am so glad you're looking forward to The Reluctant Bride, Nina. And I'm really sorry you're feeling grumpy about having to wait for the paperback release -I'll speak to Choc Lit about it:)

I also hope your weekend in bed drinking tea and reading it will be worth it. I suggest you start it when you wake up, with a cup of tea, but make sure you have the whisky on hand later in the evening when things get hairy and lives hang in the balance. Then finish the final pages with your favourite liqueur.

This was a very interesting interview, Beverley. I'm also a great fan of the Georgian period and fascinated by the "transition" to the Regency period, although that is sometimes a slightly loose term. Can't wait to read "The Reluctant Bride"!

Thanks, Henriette. One of my all-time favourite books set in the Georgian period was Karleen Koen's Through a Glass Darkly. If you haven't read it, I highly recommend it.

Great interview! I was really looking forward to reading this one before but even more so now. I love this period in history too. Also love an alpha male but am just wondering if I might be converted here. A bit of both has to be good :)

I have The Reluctant Bride by my bedside and can't wait to read it. Reading the blog has made me even keener, if anything. x

I'm currently reading The Reluctant Bride and loving it.

I like a bit of a mix of alpha and beta in my men in general, (ie, my husband, I mean:)) so I guess my favourite fictional hero would be put together in a similar way.

so glad you're enjoying it, Liv.

Hope you will too, Liz and Christina.

At the risk of sounding dumb, I never heard the term Beta male before!

Liv, my first experience of the term 'alpha' was when studying Wild Dogs in Botswana. The Alpha female was the dominant head honcho. When applied to romance an alpha hero is strong, determined (and quite often arrogant) whereas a 'beta' hero has softer (though no less heroic) characteristics.