Something old, something new... I suppose that's a different context, but of course all three Christmastide novellas in the Mistletoe Kisses and Yuletide Joy collection end in marriage. 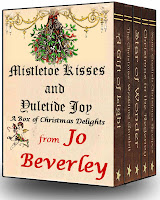 I created a "boxed set" partly because I like the visual of a boxed set for e-books, which have no physical form, but also because Christmas and boxes go together, don't they?

So where does the term Christmas Box come from?
The earliest reference I could find was from 1673 to a begging box with a slit on the side or top to receive money. The main reference was a translation from the French term for a box used by mendicant friars, but there's a reference to a similar thing being used by lads and servants. The word "Christmas" suggests that the writer means mummers or waits at Christmas.

A reference from a 1679 trial makes it clear again that it was money, though in this case there was no box involved. It was simple a small gift of money to a servant just before Christmas.

A 1720 description of an antiquity says, "which Pot I presented to the Royal Society's Repository, it resembles an Apprentice's earthen Christmas-Box." Again in 1720 we have this verse, which indicates money.
The Landladys are preparing,
Her Maids are shifting their Smocks;
Each swears she'll buy her a Fairing,
And opens her Christmas-box: .

in 1744 I first find something different. "A Christmas box for masters and misses, consisting of stories proper to improve the minds of children. 6d" A book!

I cease my explorations there, but if you have other or later references to gifts as opposed to money, please share.


My Christmas Box
is not, alas, designed to improve the mind of children, but to delight the minds of older people -- though the stories are all subtle enough in their sensuality for delicate sensibilities. Nor can I offer the rich variety of the Merry Medly, though I have added an essay on Christmas in the Regency and some seasonal recipes, old and new.

The three stories are:
A Gift of Light, a Regency which previously appeared in The Christmas Cat.
The Christmas Wedding Gambit, another Regency, which has been on my web site for a number of years, and is still there if you want to read it.
Star of Wonder, a story set in 999 AD, when Viking invasions and dread of the end of the world were shaking England. This was previously titled Day of Wrath in the collection Star of Wonder.

Though I say so myself, this would make a useful small gift or stocking stuffer for someone with an e-reader. If you go to Smashwords, it's available for any e-reader and you can get a coupon code. Write it in a card, and there you are.  Unfortunately, Smashwords doesn't allow 3-D covers, so there's a plain cover on display there.

Just to add, as it's almost Halloween,
that I have a Regency ghost story available as an e-book, and set on Lord Samhain's Night, which is also October 31st. I made a short video for that. You can see it here.

In an embarrassment of riches, I also have a story in a Christmas anthology in print or e- and made a video for that. (Can you tell I'm having fun with Animoto?) You can watch the Mischief and Mistletoe one, featuring Sparky the kitten,  here.

And, as I won't be back here for a month, on November 1st, the first of my Company of Rogues regency romances, An Arranged Marriage, will go on sale for two weeks at 99c US$ or the equivalent, which is a really good deal. Be prepared to grab. Yes, there's a video! LOL!

So, what do you think of the videos? What are your favourite kinds of Christmas stories, and what does "Christmas Box" mean to you?

I'll send one commenter a coupon for a free copy of Mistletoe Kisses and Yuletide Joy.

Posted by Historical Romance Author at 10:40 AM

I have the rogues in paper.
The vidoes are rather good but the stories speak for themselves. I don't think you have written a bad story, though I don't care for some time periods as much as the regency.
nancy
the Gmail address is wrong

Thanks, Emmily. Nancy, which gmail address? I can't find one in the blog.

Yes, we do think of Christmas boxes as boxing day, but clearly earlier they were different.

The past is a never ending puzzle!

I love Regency Romances at Christmastime--so glad this is out! I think of Christmas boxes as in Boxing Day, or as the tins that we give cookies to people in at the holidays. :)

Wow, Jo you have been busy! I shall haveno shortage of books to read between now and Christmas!

As a child we made Christmas boxes for less fortunate families of our parish - but these were boxes of food. Thanks for the history lesson.

Ej Del Leon, you're the randomly picked commenter who's won a free copy of Misletoe Kisses and Yuletide Joy. E-mail me at jo AT jobev.com to get the coupon.

Thanks for share the valuable content here..
I also searched for custom christmas boxes in USA for my gifts...

All the details you placed on unique christmas boxes wholesale make these efforts rewarding and important to the growth of your brand. These boxes serve as the highpoint of retail. They do their best to seize every opportunity to attract customers and prospects.