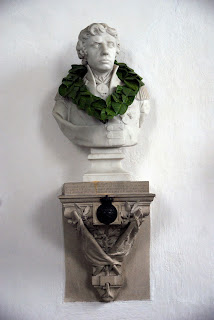 Norfolk, where I live, is ‘Nelson’s County’. Horatio Nelson was born at the Rectory in the little village of Burnham Thorpe near the North Norfolk coast in September 1758. His father was the rector of the parish, the living of which was in the gift of his wife’s influential relative, Horace Walpole. Catharine Nelson died in 1767 leaving Edmund with eight children to raise.

Horatio, the sixth child, preferred to be called Horace when young - in the church is a copy of a wedding certificate he witnessed as youth, signing himself with that name. It was changed to Horatio in his father’s hand. A second copy of a rather later certificate that he witnessed shows the first known example of the signature, “Horatio Nelson”.
When Horatio married Fanny Nesbit they eventually came to live at the Rectory for a while.

Horatio Nelson therefore knew the church at Burnham Thorpe very well both as a child and an adult and it remains an atmospheric place, filled with Nelson references. There is a monument to him in the chancel, below that to his father and over the spot where his parents are buried. 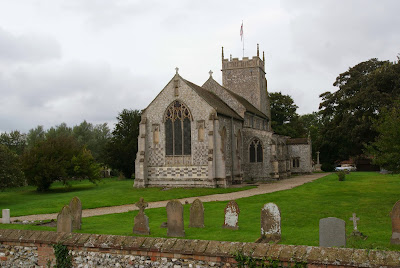 The flag that flies from the church tower is not, as is usual in English churches, the cross of St George, but the Navy ensign in the form used before 1801 – that is, before the union with Ireland. This is the ensign that would have flown on all of Nelson’s ships until 1801 – but not of course, at Trafalgar. 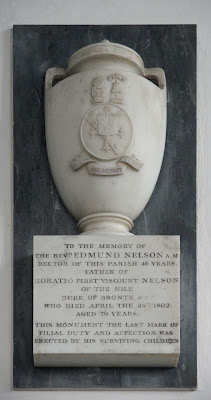 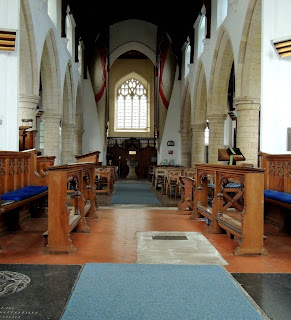 The church has been rather rigorously ‘tidied up’ inside by the Victorians who rebuilt parts of the nave and installed a pulpit carved from a beam from HMS Victory. More recent additions are the flags from HMS Nelson, presented by the navy in 1955 to commemorate the 150th anniversary of the battle of Trafalgar.
The 13th century font that Nelson was baptised in remains, although the stem is a replacement. Outside, the exterior has many features that would have been very familiar to Nelson – the handsome East end or the charming little medieval carvings that survive in severl corners.
The Rectory was demolished in 1802 and all that remains is a roadside plaque. It can be seen in this painting in the National Maritime Museum
http://collections.rmg.co.uk/collections/objects/13252.html
Across the green you can see the village pub, built in 1637 as The Plough and renamed The Lord Nelson in 1798 following his victory at the Battle of the Nile. Nelson held a dinner here for the men of the village prior to his departure to join HMS Agamemnon and the interior is remarkably well preserved, right down to the worn brick floors you can easily imagine Nelson walking on.
Posted by Louise Allen at 5:00 AM

What an interesting post, Louise. I had no idea that Nelson was related to Horace Walpole. Two more different people could hardly be imagined.

I know he built the Gothic fantasy at Strawberry Hill but, somehow, one doesn't imagine him having church livings to bestow!

Fascinating post, Louise. I went to Norfolk many years ago and loved it. We want to go back someday, and if we do we must visit the the village he was born in. Caroline xx