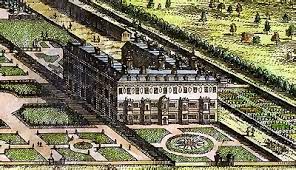 I love stately homes, visiting them, taking in all the art and artefacts, the details of who has lived there down the ages. I love ruins too. They can be poignant and romantic and you can let your imagination run wild about the history and the people who inhabited them. But there’s a third category of historic house that I enjoy; the ones that have disappeared. They are like ghosts, mysterious, lost. Two of the houses that inspired my current manuscript are “lost” houses.

The first, Hamstead Marshall in Berkshire, pictured above, was known as Hamstead Marshall Palace, a house of the size and grandeur to rival Blenheim. Hamstead was intended for a queen, Elizabeth of Bohemia, the sister of King Charles I, and it was reputedly modelled on the castle in Heidelberg where she had spent the early years of her married life. It was grand and fabulously luxurious. A contemporary described it as having not only bathrooms but rooms with the specific purpose of “reposing after bathing.” The servants’ quarters included a distillery, a spicery, and a confectionery. 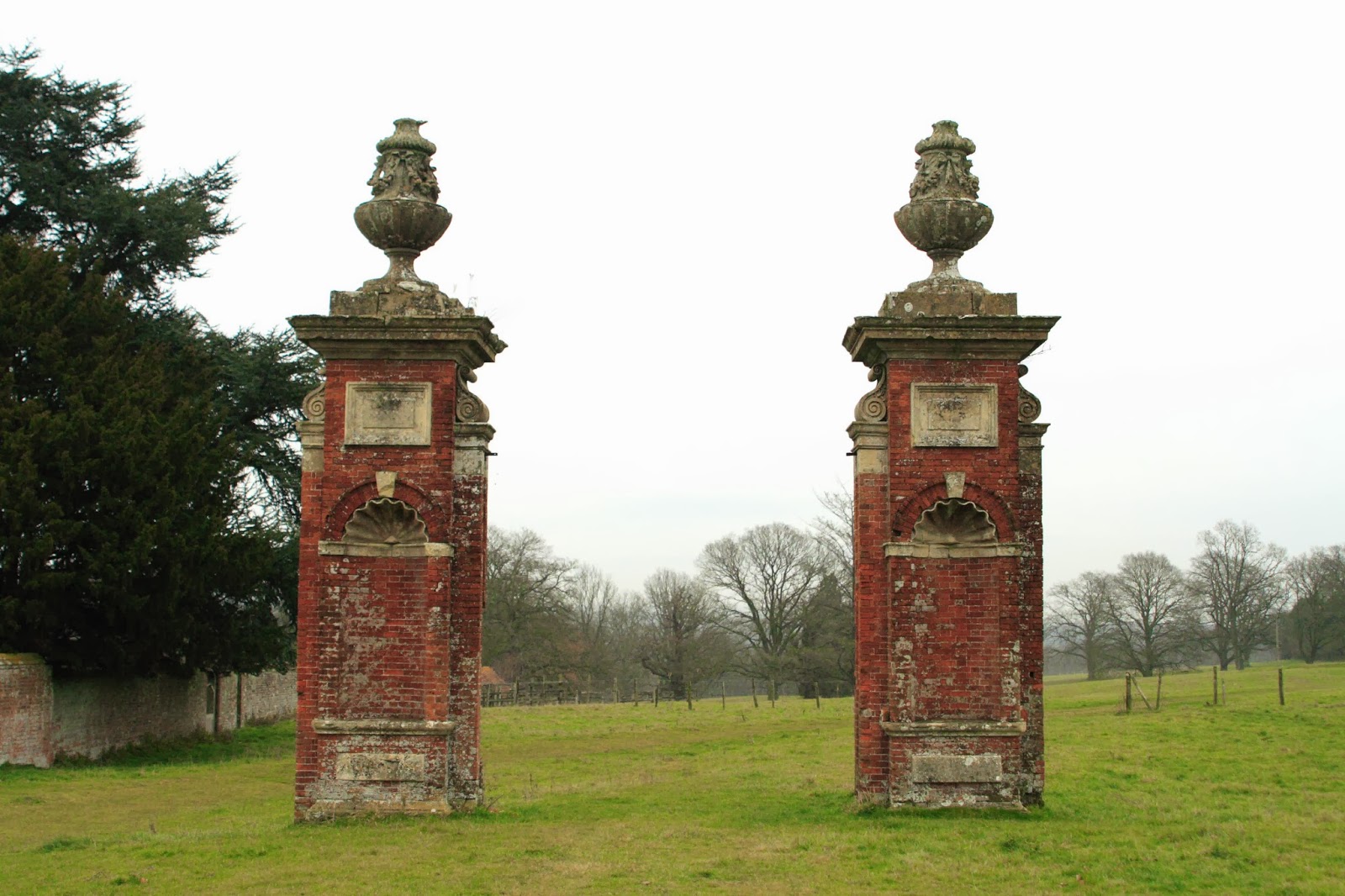 brazier unattended on the roof. All that is left of the house now are some magnificent gateposts that stand in the parkland, marking out where the drive and gardens once were. The site of the former house and its wonderful parterre is now a field and plenty of floor tiles and window glass from the building can be found just lying around on the ground. On the day I visited it felt like a lonely and windswept place. 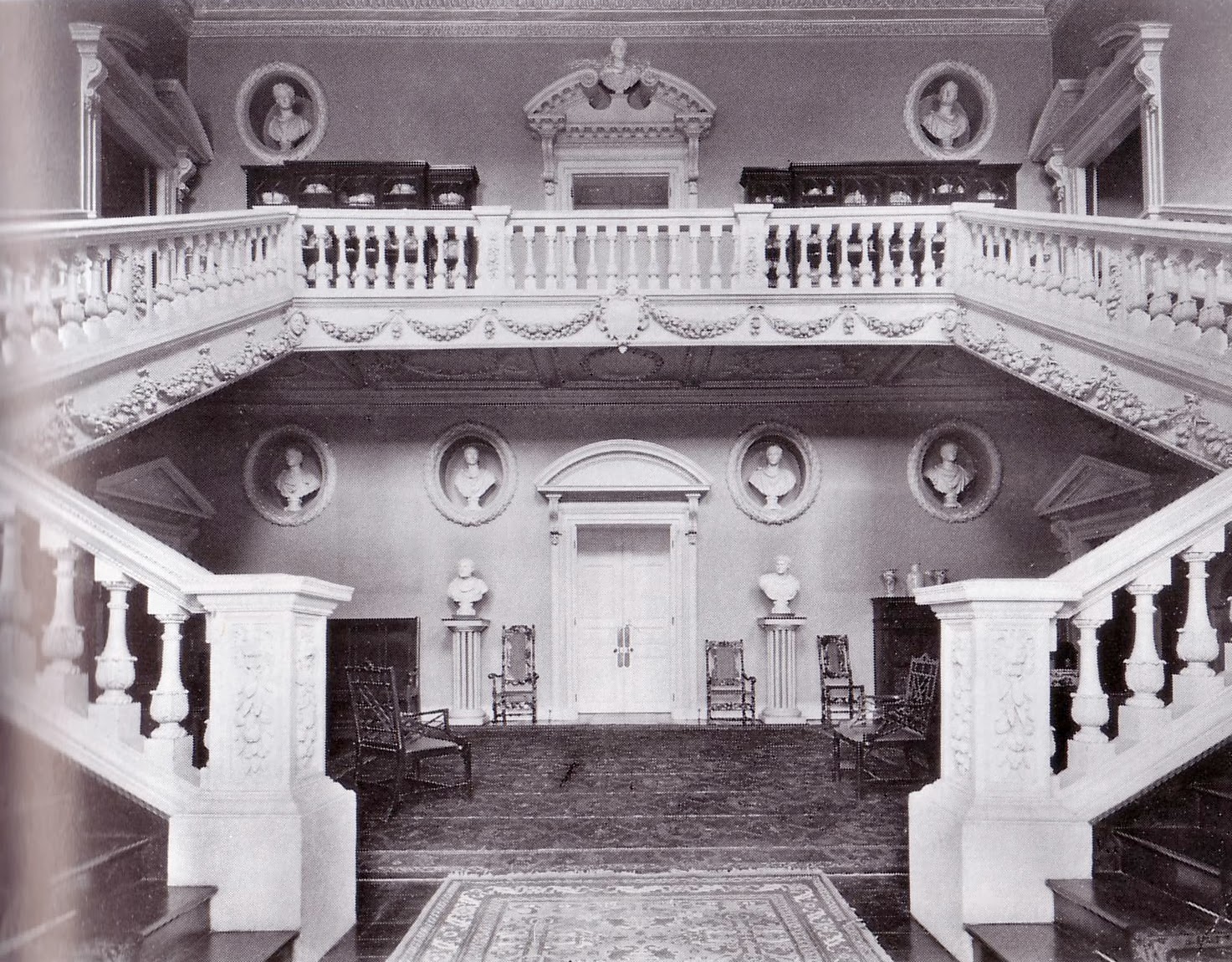 The other house I’ve drawn on for background research suffered the same fate, but much more recently. Coleshill House in Oxfordshire was built around the same time as Hamstead Marshall and inspired by fashionable European houses of the period. It
had a grand entrance hall and beautiful ornate plasterwork ceilings. Builders were finishing renovations to the house in 1952 when a fire broke out and despite the efforts of fire brigades from three counties, the house was so badly damaged that it had to be demolished. I draw on the newspaper reports of the fire in my new book as they vividly recreate the sheer monumental destruction of such a beautiful house. Today there is a garden planted on the site of the house that marks out its walls and windows in a design that keeps the memory of Coleshill alive. I hope that in my manuscript I too will be able to bring Hamstead Marshall and Coleshill House back to life and people their ballrooms and corridors once again with characters from a lost age.
Posted by Nicola Cornick at 9:50 AM

It is fascinating to learn of these lost houses, Nicola, thank you. Coleshill was such a picture book house and I have used an old black and white photo of the exterior as inspiration in more than one book. Another evocative ruin is Sutton Scarsdale, Derbyshire, the shell of a Gerogian Mansion. And of course Seaton Delaval in Northumberland. It was devastated by fire in 1822 and you can still see much of the fire damage.

Thanks, Sarah! Yes, Coleshill was so very beautiful. It must have been heartbreaking to stand there and see it burn down. Places like that and Seaton Delaval really bring home to you the sheer detructive awfulness of fire at a time when they didn't have the resources to put it out quickly.

I love the look of Sutton Scarsdale. Ruins like that are so evocative and inspirational.

I just love that sweeping staircase - just the thing for one of your lovely heroines to descend, slowly, looking beautiful, and see your hero - who up to now has ignored her - staring up at her, entranced...

Ooh, Elizabeth, I feel a story coming on! There is a lovely old house near us that was a burned out shell. It was inspiration for Bought for Revenge, where I had the hero rebuild it. Now someone has bought it and is renovating it, a case of life imitating art, perhaps....

It is a beautiful staircase, isn't it, Elizabeth. The interior of the house was glorious.

How intriguing that someone is renovating the house you used as a model, Sarah.

HMMM....IMAGINE WHAT THE GHOSTS COULD TELL!

Oh don't get me started on ghosts.... time slip story coming on!

I am interested to see just what they new owners do to the old property, Nicola, it is a listed building, so they will have to maintain its architectural heritage. It isn't as grand as Coleshill, but it will be beautiful.

There are several brilliant story ideas here. I love the idea of the ghosts!


Your post is superb. Thanks for sharing us updated information.