Past Times and Pubs with Fanciful Names

One of my joys with research is Brewer’s Dictionary of Phrase and Fable, of which I have two copies. One is pretty old, though not a first edition. The other is more up to date, acquired from WH Smith in the 70s or 80s, I think. It says it’s a facsimile of the 1894 edition, so mine may be earlier as close examination finds differences in the text.

One of my favourite digs in these tomes is to find unusual pub names to use, and the pages devoted to this are a delight to me, with stories or origins of the names and unexpected finds. A few examples I’d like to share here. 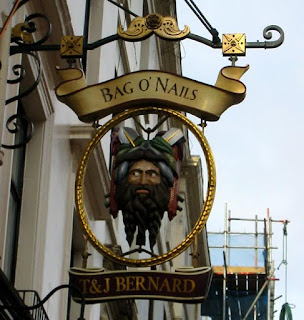 The Bag o’ Nails is a corruption of the “Bacchanals”. You might guess it from the inn sign, which certainly looks Bacchanalian. But its meaning has changed over time. Grose says this: “He squints like a bag of nails; i.e. his eyes are directed as many ways as the points of a bag of nails. The old BAG OF NAILS at Pimlico; originally the BACCHANALS.”

These days I find the phrase has come to mean everything is in disarray. In the sixties The Bag o’ Nails was a music club in London boasting the likes of Jimi Hendrix, Georgie Fame and Eric Burdon. 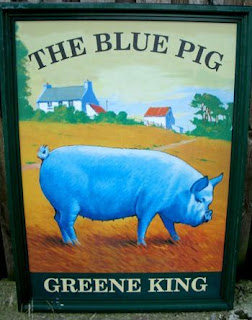 Here we have The Blue Pig, a name I used in The Deathly Portent (my second Lady Fan Mystery). Another corruption, this time of The Blue Boar, which Brewer tells us is the cognizance of Richard III. A cognizance, in Heraldry, is “a distinctive emblem or badge formerly worn by retainers of a noble house”. Not sure how Richard would have felt about the pig!

Speaking of pigs, I was amazed to find that The Pig and Tinder Box (for which I could find no pub sign image although there is one in Tamworth apparently) is, according to Brewer, a colloquial name for The Elephant and Castle, “in allusion to its sign of a pig-like elephant surmounted by an erection intended to represent a castle but which might pass as a tinderbox”. 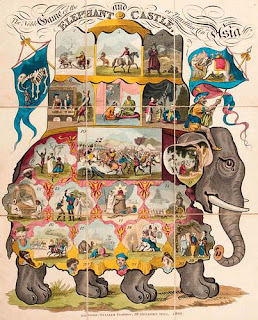 To my regret, I could not find a single pub sign with an elephant that looked like a pig, but this one is, I think, rather entertaining. 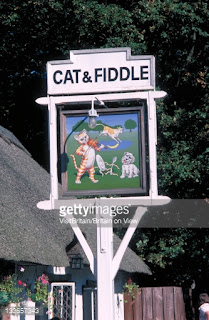 The Cat and Fiddle, which I thought had something to do with the nursery rhyme and the cow jumping over the moon is disappointingly a corruption of Caton Fidèle, “i.e. Caton, the faithful governor of Calais.” I cannot find any reference to Caton, the brave governor of Calais being John de Vienne who was one of the 6 burghers – the subject of Rodin’s sculpture - to give themselves up to Edward III.

However, Brewer goes on to say that La Chatte Fidèle, a pub in Farringdon (Devon) commemorates a faithful cat. Or, he claims, it could also simply mean “the game of cat (trap-ball) and fiddle for dancing are provided for the customers”. Which seems only too likely to me. 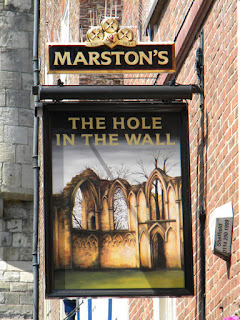 The Hole in the Wall, which we now know as a place to get cash, was originally so called “because it was approached by a small passage or ‘hole’ between houses standing in front of the tavern”. Which makes one wonder how on earth you ever found the place. This sign seems to bear out the explanation though. 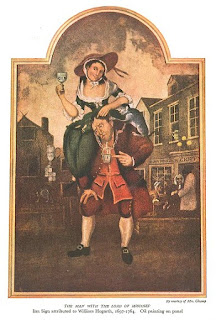 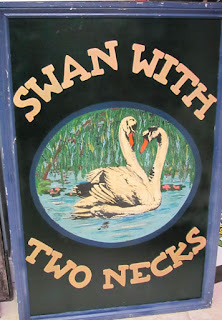 The rather charmingly named The Swan with Two Necks is correctly Nicks from the “nicks” cut into a swan’s beak to mark ownership. Two nicks belonged to the Vintners Companies’, while five meant the swans were royal. “Swan-upping” is “the taking up of swans and placing marks of ownership on their beaks”. This was done annually down the Thames evidently, and perhaps it still is. The Swan with Two Necks pub was, in the Regency, one of the main London stagecoach starting points, and it thus features in my Fated Folly when our heroine is trying to find out if her brother has eloped with her friend.

Sadly, I couldn’t find any images for The Iron Devil, which sounds like some kind of medieval instrument of torture, was in fact a corruption of Hirondelle, French for swallow.
But I could not end without mentioning The Man Laden with Mischief, rather uncomplimentary to the fair sex (how surprising!), which was a public house sign in Oxford Street, said to have been painted by Hogarth, “and shows a man carrying a woman and a lot of other impedimenta on his back”. I leave you to judge of the justice of this commentary.

Posted by Elizabeth Bailey at 11:39 AM

I really enjoyed this, Elizabeth. 'La Chatte Fidele' (sorry, it won't let me do a grave accent!) could also possibly be a reference to Dick Whittington's cat; didn't he come from the West Country?

Interesting -love the reasons behind names.

Thanks, both. You may well be right about Dick's cat, Elizabeth, though Brewer doesn't mention it. And checking it, I see I forgot to put in the Elephant and Castle image, which is a pity as it's rather fun. I'll see if I can edit it.