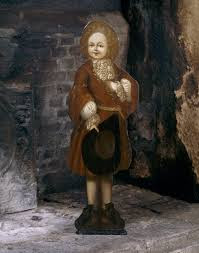 Nicola here. If, like me, you don't like waxworks or dummies, one of the scariest things that can happen when you visit a historic house is unexpectedly coming across what is known as a "chimney board." I'm not of a particularly nervous disposition but if I wander through the deserted rooms of a stately home and catch a glimpse of a still figure staring at me I do find it slightly creepy!

The dummy board or chimney board is a life-size, flat wooden figure painted and shaped in outline to resemble a real person. They come in all shapes and sizes - solders, servants, children, even animals. These first silent companions as they were also known, were produced in the 17th century and were intended to be decorative jokes. There are stories from the period of telling of how, for example, one gentleman placed a wooden maidservant at the door of his salon and everyone found it highly amusing when one of the guests tried to tip her. No doubt such impostures were easier in the days of poor lighting! In 1777 Miss Sally Wister of Philadelphia wrote in her diary that the cut out wooden figure of a British

grenadier, six foot tall and looking very fierce, startled a nervous visitor to the house who ran away thinking that the British had arrived. Wooden grenadiers were also on guard at the Tower of London as early as 1700 and it was a feature of tobacconists shops in the years of the Jacobite rebellions to have cut out figures of Highlanders! A newspaper of 1745 commented: "We hear that the dapper wooden Highlanders who guard so heroically the doors of snuff-shops intend  to petition the legislature that they may be excused from complying with the Act of Parliament with regard to their change of dress," this being the time that the wearing of the kilt was forbidden. In 19th century North America carved figures of Red Indians were adopted by tobacco stores in a similar manner.

A secondary use for such wooden cut outs was to act as a firescreen. Although some were used to shield people from the heat, this did cause the paint and varnish to warp, and where they were made of paper stuck onto the wood there was a double danger that they might catch fire. The figures were better used to mask an open fireplace during the summer months.

There was a huge variety of different types of figures. Servants, particularly maids with brooms, were very popular. A maid peeling apples sits in the hall of one National Trust house whilst male servants are depicted ushering visitors into rooms. Pairs of children with pets and toys were also popular. Figures of soldiers were used to guard doorways in private houses, inns and military establishments. As late as the 1870s soldier figures were popular decorations at provincial tea gardens!

Some animal figures from the past few centuries also survive, including cats, particularly tabbies, dogs, pigs, parrots and rabbits. Whilst many of these boards were created by sign-makers, some were designed by established artists.

Castle when she tended him through illness there. Gainsborough created a wonderful half-size figure which he set up on his garden wall to the surprise of passers by. It was known as Thomas Peartree!

Have you seen any "silent companions"? Do you find them fun, attractive or creepy?! Would you have one in your own home?

Posted by Nicola Cornick at 2:01 PM

I've come across the occasional 'chimney board' in Stately Homes, but I didn't realise they came in such an interesting variety of characters. A most enjoyable post.

I don't think I've seen one ever! I have seen the American Indian tobacco shop ones in films though. I didn't know about them, but love the idea. Shall be looking out for them now. I should think in candlelight they might well have been creepy or startling. Great fun though.

Thank you both! I do think they are fascinating in a rather sinister way, and the history of how they developed is very interesting. I've only ever seen "human" ones, not animals. Apparently they were also used for extras in theatrical entertainments!

Thanks for this, Nicola, a wonderful post, as always.

Maybe they were company for lonely spinsters, etc.! I find them a bit creepy, too, Nicola. Today we get the cardboard cut-outs of policemen in shops etc., so the idea is still around.

I don't think I've ever seen the cardboard cut outs of policeman, Melinda, but yes, of course we do still have our own "modern" versions. Which is a bit strange, in a way!

There used to be a cardboard cop in our local Boots, but he suddenly vanished. Maybe he had been 'nicked'!