ROMANCE & THE DARK SHADOW OF WAR 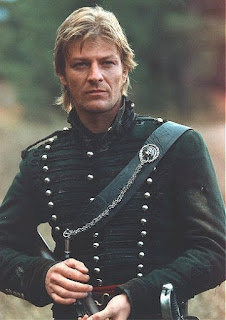 I have been writing Georgian and Regency romantic adventures for decades now, and one cannot research the period without coming up against the dark shadow of war. England and France had been at war, off and on, for centuries, it affected everyone's lives, from trivial problems such as where to buy French brandy, to families fearing for their loved ones who were in the army or navy.
I make no apology for my first illustration of this post - Cornwell may not write "romantic novels", but there can be no doubt that this guy sets many hearts a-flutter!)

As a romantic novelist I am writing an entertainment, but although the main theme of my books may be love, and the reader is guaranteed a happy ending, I also like to acknowledge at least some of the realities of life in the Georgian and Regency period, and very often that means alluding to war in some way. My latest Sarah Mallory novel, The Duke's Secret Heir, is partly set in Harrogate, and even in this genteel watering place the consequences of war make themselves felt: the duke is there to visit his closest friend, an ex-soldier who is surviving with a bullet lodged in his lung. 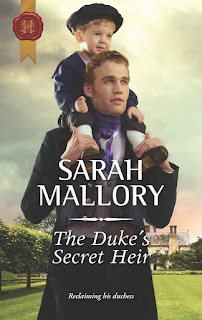 There were breaks in the hostilities between England and France. One of them was the short-lived Treaty of Amiens, which lasted for just over a year from March 1802. I used this period as the setting for another story, where I sent my newlyweds careering across France. War was declared again before they could complete their journey back to England and they had to use a great deal of ingenuity to escape, so it proved a very adventurous honeymoon! At one point, as their coach hurtled through a hostile village, it was pelted with sabots by the locals (and it is said that the word sabotage derives from the disgruntled French workers from  about this time, throwing their wooden clogs into the machinery to damage it). I had great fun with this book, and it remains a firm favourite, a lively tale despite the fearful danger surrounding my couple. It is currently e-published as To Marry a Marquis in the Ladies in Love box-set, available on Amazon. 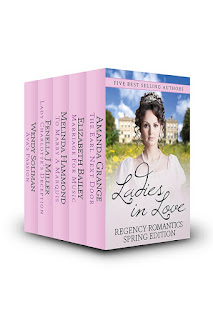 One of the turning points for the Regency was the Battle of Waterloo – "a damn close-run thing," as Wellington described it. Perhaps it was growing up in a street full of boys and playing war games most evenings and holidays that gave me a liking for action, and I find military history fascinating. However, I write romance, and mainly from the female point of view, so most of my books show the aftermath of war rather than the battles themselves. Most ladies were kept well away from scenes of conflict, even soldiers' wives and the camp followers did not venture onto the battlefield itself until after the event. However, in A Lady for Lord Randall ,my Sarah Mallory book for the Brides of Waterloo series, the hero is a colonel, and I did put in a large battle scene, which I thoroughly enjoyed writing!

Fascinating as it might be, war is a dark and desperate business. When I was refreshing one of my early Melinda Hammond novels ready to re-publish it as an e-book , I had quite a surprise. I had forgotten just how much description I had included about Waterloo. In Maid of Honour, my heroine, Lucy, travels to Brussels in June 1815. She attends Lady Richmond's Ball, probably the most famous party of all time, and unlike most of her non-military compatriots, she remains in Brussels during the battle. Maid of Honour is written mainly from the heroine's point of view, and since it was not the hero, but Lucy's childhood sweetheart Tom who is the soldier, I wrote this part of the story as Lucy would have experienced it.

On the day of the battle itself she mistook the rumble of guns for thunder over Brussels, until a crippled old veteran explained. Then, fleeing cavalry careered through the town proclaiming that all was lost, the Allies were defeated and Bonaparte would be in Brussels by nightfall.


Lucy is advised to leave the city but she is determined to remain, and when at last she learns that Napoleon has been defeated, she waits anxiously for Tom's return. When she learns his regiment was caught up in some of the bloodiest fighting near Hougoumont she sets out to look for him on the battlefield itself. Here's a brief excerpt: (NB if you are of a nervous disposition, you may want to skip this bit!)


It seemed to Lucy that the full horror of the battle was spread below her. The ground was covered with the dead, men and horses entangled in a nightmare pattern, the garish colours of the uniforms dulled by mud and grime and dried blood. Scores of French cavalry had died attacking the British squares, yet the men who had shot them down now lay dead in the very formations they had fought so hard to maintain. That anyone could come out of the battle alive seemed to Lucy to be nothing less than a miracle. A movement caught her eye and she saw grey-cloaked women moving amongst the dead, taking rings and watches, even pulling teeth from the corpses to sell in the markets of Brussels and London.


She finally finds Tom in one of the field hospitals. These are little more than a huddle of tents with overworked medical officers and surgeons doing their best to save lives. There was very little they could do – there were no painkillers or antibiotics, and surgeons would remove an injured limb in an attempt to save a man. It was crude, brutal, and those who did not die of their wounds often succumbed to infection. This section of the book is dark, perhaps, but I wanted to show the horror Lucy was experiencing. She was a young woman from a privileged background, accustomed to a safe, comfortable home. Suddenly she finds herself in a nightmare world where she has to draw on all her strength of character to get through it.


A romance needs a backdrop, and there is no doubt that wartime provides one of the most dramatic. Whether the characters are in physical danger themselves, or living with the uncertainty of what may happen to their loved ones, war adds an extra dimension to a story.


What is your favourite wartime romance? Is it perhaps a literary classic like War & Peace or an epic like Gone With the Wind? Or maybe it's a romance by Carla Kelly, or Louise Allen? There are so many to choose from, so wartime romance clearly strikes a chord with many readers.

So interesting how you've woven war into your plots. I've only once written a battle and that was in a so far unpublished novel. The Battle of Dettingen in mid-18th century was a fiasco and the only reason the British won was because the French marshal made a series of errors of judgement. But the cavalry took tremendous losses as they had to stand facing cannon from across the river. My hero's particular regiment was decimated. It's a horrifying tale, but I must say I enjoyed writing it. One of these days, it might see the light of day, but it needs extensive rewriting as it was a very early book and I really didn't know what I was doing!

Thank you Elizabeth, ware is such a major part of our history that I think it is necessary to mention it where appropriate, although it doesn't happen in every book!

I do hope you finish your Dettingen book - that period of history is not so well known as Waterloo and deserves and outing.

I share your interest in military history, Sarah/Melinda. I like knowing how the system worked: who did the cooking, mending, washing, for example? We can guess the answer, of course. The women who followed the soldiers are the unsung heroines of the Napoleonic war campaigns, in my view.

My favourite Regency novel with a war setting is probably Georgette Heyer's 'Spanish Bride', the real life love story of Captain Harry Smith and the fourteen-year-old Juana Los Dolores de Leon. Heyer gives us an unflinching view of the dusty, gritty everyday realities of camp life, the wearisome marches and the terrors of battle.

Incidentally, I've just read your 'Disgrace and Desire' which opens with a very graphic scene of carnage after the Battle of Waterloo which pulled me into the story immediately. Terrific read.

I agree, The Spanish Bride is wonderful, Elizabeth H. I found it quite difficult at times, because as you say, Heyer did not flinch from showing us the hardships involved.

And thank you so much for the kind words about Disgrace & Desire - it is still one of my favourite books!

Are you tired of searching for bitcoin faucets?
Triple your claimed satoshis with this new BTC FAUCET ROTATOR.

Did you consider picking the #1 Bitcoin exchange company - YoBit.

eToro is the ultimate forex trading platform for beginning and advanced traders.