Earlier this week, I was invited to the Royal Mews Bloggers’ Breakfast. I’d never visited the Royal Mews before and I had the most fascinating morning. This post looks at a couple of things I learnt which I thought might interest you. You may already know them but my own knowledge, as I discovered, needed both correcting and expanding.


First: the landau. I remembered, of course, the obnoxious Mrs Elton, in Jane Austen’s Emma, boasting about her sister’s barouche-landau  - which she takes every opportunity to mention (presumably because Emma doesn’t have one at Hartfield). And, at the end of Persuasion, Captain Wentworth buys Anne ‘a very pretty landaulette but I wasn’t very clear as to what a landau actually was, and how it differed from other coaches. 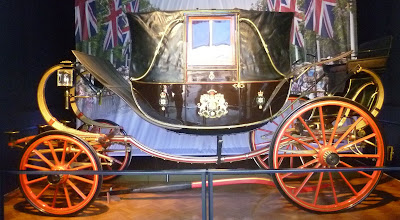 
According to the O.E.D., the word dates from 1743 and comes from Landau in Germany where this four-wheeled carriage was first made. Its top is in two parts so that it can be either half or fully opened. It looks a bit like an old-fashioned perambulator. I’d always pronounced ‘landau’ as if it were German (which it was, originally) with the ‘au’ bit rhyming with ‘Frau.’ I was wrong. It’s correct pronunciation is ‘landor’.
A State Landau looks much the same as the semi-state but is more decorated. The 1902 State Landau which carried the Duke and Duchess of Cambridge back from Westminster Abbey to Buckingham Palace after their wedding, is upholstered in crimson satin and richly ornamented in gold leaf; it has four candle-lit lanterns and is drawn by four Windsor Grey postillion horses, that is, it’s driven by postillion riders. 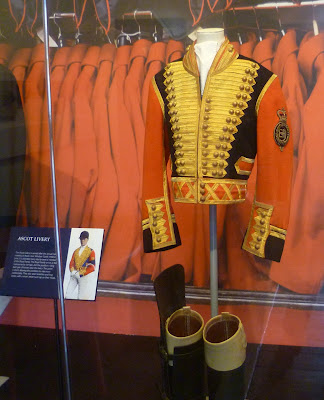 
The postillion’s state livery comprises a scarlet and gold jacket and a wig and cap. The jackets may change - they also have semi-state livery, Ascot livery and everyday dress - but they always wear white breeches and top boots.
The State Landau can hold up to four people and it’s perfect for those occasions where the occupants need to be clearly seen from three sides: two footmen, looking magnificent in their red and gold coats, sit behind the occupants. 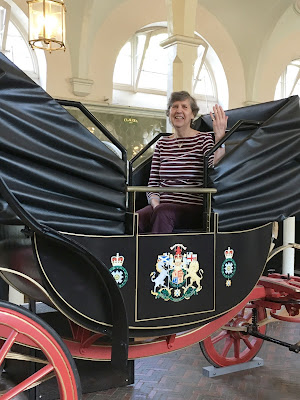 Here I am, in a Semi-State Landau, waving


And, if you want to sit in one yourself, there is a replica Semi-State Landau in the Stable Block where you can do just that. It’s certainly comfortable to sit in but it’s probably not so much fun when moving as the floor of the landau moves both up and down and from side to side.
The second thing I learnt was the difference between a coach being ‘postillion driven’ and ‘coachman driven’. 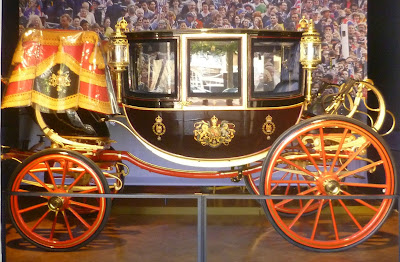 
This coach dates from 1881 and it was bought for King George V’s coronation in 1911. It is a particularly comfortable coach with excellent suspension, which must be a relief - not all of the royal coaches are so comfortable. Traditionally, it is the coach royal brides travel in to their weddings, including Lady Elizabeth Bowes-Lyon in 1923; Princess Elizabeth in 1947; Princess Anne in 1973; and Lady Diana Spencer in 1981. At least they didn’t arrive at the church door feeling sick. 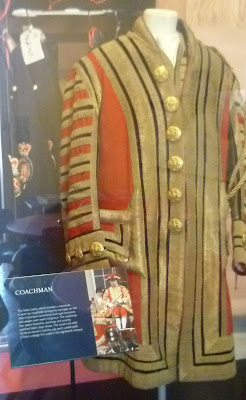 
You can see that there is a box richly draped with a ‘hammer cloth’ at the front for the coachman to drive the horses. His state livery is the gold and scarlet frockcoat shown above. He also wears scarlet plush knee breeches, pink silk stockings, and gold-buckled shoes, not to mention a wig and a wonderful tricorne hat with ostrich feathers. There is no seat behind for the footmen; they have to stand – though they do get to wear rather amazing hats which makes them look as if they’ve just returned from the Marlborough wars. Their job is to open the door and let down the steps for the occupants. 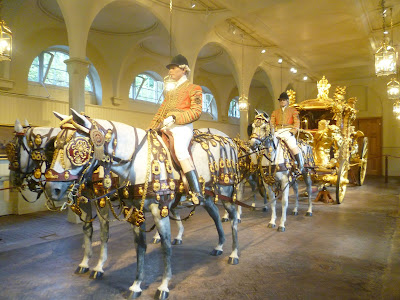 The Gold Coach used at the Coronation


Here the Gold Coach, the one used in the coronation; this is postillion driven. The postilion rides the leading nearside horse of a team or pair and it is he who drives the carriage. The Gold Coach actually needs eight horses to pull it, so each pair has a postillion on the nearside horse. The nearside is the pavement side so, in effect, postilion–driven coaches have a right-hand drive.
Most of the royal coaches can be either postillion-driven, or coachman-driven as the coachman’s box is removable. If there is a royal event where it’s important that the occupants are seen, then the coach’s box will be removed and the coach will be postillion-driven.
We were very lucky to have an excellent guide, Charlotte Regen, who is currently writing a book about the Royal Mews. She not only gave us the information in a lively and interesting way, she also told us the stories behind the coaches.
Elizabeth Hawksley
www.royalcollection.org.uk
www.elizabethhawksley.com
Posted by Unknown at 6:51 AM

This is fascinating, Elizabeth. Thanks for posting. I'd always pronounced landau as land-oh, so now I will have to make a conscious effort to say land-or. It was fascinating to know about the difference between coachman driven and postillion driven coaches. I'd never thought about it before, but, as you say, postillions make sense when the occupants need to be seen.

Thanks for your comment, Amanda. I, too, was pleased to learn about postilion-driven coaches. I'm sure I remember a couple of references to them in Georgette Heyer's novels which will now make sense.

Must admit that I thought carriages/coaches were either permanently coachman-driven or postilion-driven. I hadn't realised that they could be convertible, at least for some vehicles. I imagine non-royal vehicles were bought as either one or the other,
but perhaps not? It's a really interesting slant on something I hadn't thought about before.

Couldn't help noticing, pedant that I am, that you said postilion-driven was right-hand drive. I think you meant left-hand drive, perhaps?

I'm with Joanna. I didn't know you could convert coaches. I think post-chaises are traditionally driven by postilions because there is a window at the front and no apparent place for the coachman to sit. I wonder if even these could be converted? Also didn't know the land-or (me too, Amanda!) had a convertible roof! A bit like a sports car now really.

Thank you for your comment, Elizabeth. I really don't know the answers to your point abut coachman or postilion. I suspect that Lady Catherine de Bourgh had a coachman; a ponderous coachman wearing a heavy coat and carrying a whip sounds a bit more solid, somehow.

Thank you for your comments, Joanna. Re: right-hand drive. It's a bit confusing. In the UK we drive on the left-hand side of the road and the driver sits on the right hand side of the car. With a postilion-driven coach, the postilion sits on the nearside horse of a pair, that is the pavement side which is on the left, not on the off-side horse, which is on the right.

There's probably a technical term for this, but I've no idea what it is! But thank you for pointing it out.

I wonder if you or any of your correspondents have any information about State Coaches used by the Prince Regent between 1811 and 1821? Do any of them survive? I am researching a gilt-bronze armorial in my possession, from the hammer cloth of a State coach. The coat of arms is, I believe, that of the Prince Regent and must have been removed prior, (or subsequent) to his coronation on the 19th July.

Are you paying over $5 per pack of cigarettes? I'm buying high quality cigs over at Duty Free Depot and this saves me over 70% from cigarettes.

I’ve had a couple of events at this location. The only thing that would have made these NYC wedding venues guys better would have been better communication in the earlier planning stages, but it all worked out great in the end.

Re the driving on the right or the left: A postilion normally rode the left (or "near") horse of a pair because horses usually were trained only to be mounted from the left. So it also made sense for the carriages to drive on the left, and passengers enter from the left side. In 1756 The volume of carriage traffic in London traffic was so large and became so chaotic, that Parliament in an effort to bring some order finally passed a law forcing traffic to keep to the left on London Bridge. 17 years later the Highway Act extended the rule to cover the whole country, hence the rhyme from the period:
The law of the road is a paradox quite In riding or driving along,
If you go to the left you are sure to go right, If you go to the right you go wrong.
It was post revolution France that switched to the right-hand side of the road - and no way would the British follow the French, and so they still drive on the left (along with Japan, Australia, Ireland etc.)