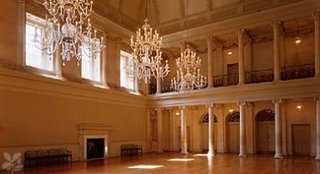 When Georgian or Regency novels talk of Assembly Rooms, the locations are usually Almacks, or Bath, or Harrogate. But in the far west of England during this period a little oasis of wealth and culture was blooming. A gentleman visiting in 1790 claimed that Truro was "unquestionably the handsomest town in Cornwall." The centre of the town was High Cross, site of annual fairs and weekly markets complete with bull baiting. But with the town's wealthy citizens getting richer - Ralph Allen Daniell's nickname was "Guinea a minute", an indication of his reputed earnings - they wanted to raise the tone and build an elegant location for more genteel entertainment. They wanted Assembly Rooms. The money was raised by the sale of 28 shares costing £55 each. Lord Falmouth bought three. The Assembly Rooms opened in 1789, and among the people attending the ceremony was famous actress Sarah Siddons.

But while the wealthy danced, flirted, played cards and enjoyed lavish banquets, trouble was brewing. The Revolution across the Channel had unsettled local landowners who were worried about its possible influence on the lower classes here. By 1793 England was at war with France. When the harvest failed in 1795 riots erupted as starving miners flooded into Truro from the surrounding countryside to protest at the price of bread. Yet by 1798 spirits were rising once more with one of Nelson's victory over the French. Truro's Assembly Rooms were the perfect location for a glittering ball. This time though, motivated either by a sense of self-preservation or perhaps a genuine desire that the whole county share the celebration, in every town Cornwall's wealthy citizens contributed an ox or a sheep and many gallons of beer so the ordinary folk could rejoice with their own street party.

"If you like romantic suspense...then this is for you." Rachel A Hyde, MyShelf.com
Posted by Historical Romance Author at 7:22 AM

Gorgeous photo, Jane. Can't you just imagine it full of people, twirling the night away (provided it was a full moon, of course)? Are there also ante-rooms for supper, cards etc?

I had a recent treat at the assembly rooms in Bath which look to be the ones featured in your picture. I got chatting to one of the men who looks after the wonderful chandeliers and he asked me if I had ever seen the ball room at night. I said I had only ever visited in the day and so he offered to give me a chance to see the room lit up on 'candle ' setting. With a flick of a switch, the blinds lowered and the chandeliers glittered, as beautifully as they must have done in Georgian times. I shall never forget it!
Incidentally, there is a lovely costume exhibition on there at the moment which features some lovely Georgian/Regency dresses, embroidered waistcoats etc.

Unfortunately, though you've mentioned Sarah Siddons at the opening, you've omitted the fact that Truro's Assembly Room was planned and built to be dual-purpose. Surviving photos taken in 1923 (now in a local Museum) show that beneath the dance floor was a theatre Pit (what we now call "stalls') complete with raked floor and a row of curved 9 inch wide benches. When Box Fronts were slotted between the Assembly Room columns, it transformed instantly into a theatre - complete with front and side galleries - probably with audience on three sides of the main acting area (or stage front).