New TV adaptation of Jane Eyre for the autumn 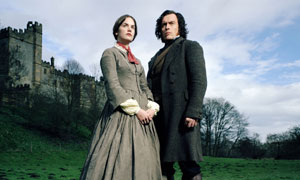 This autumn looks as though it's going to be a feast of TV for lovers of historical romance. Not only are there new versions of several Austen classics to look forward to, but also a new BBC version of Jane Eyre.

"Newcomer Ruth Wilson (Jane Eyre) and Toby Stephens (Edward Rochester) head up an all-star cast in a passionate new version of the much-adored classic Jane Eyre for BBC ONE.

The sustainability and appeal of Jane Eyre lies in her universality and the audience's appetite for a well-told romantic tale."

So what do you think of the casting? And why do we all love Jane Eyre (unless you don't love it, in which case, tell us why you don't!)
Posted by Historical Romance Author at 8:11 AM

Toby Stephens who plays Rochester also played William Dodds, the villian in Sharpe's Challenge as well the villian in Live and Let Die. He has one of the best sneers in the business. He is Maggie Smith's son.
I am really looking forward to this adaptation.

Toby Stephens was also Duke Orsino in a film version of Twelfth Night which had Helena Bonham Carter and Imogen Stubbs in it.

If you enjoyed Jane Eyre and like a dark tale, try Jean Rhys, Wide Sargasso Sea which was inspired by Bronte's book. It is beautifully written, telling the story of Rochester's first wife.

Ohhhh, I was at Haddon Hall in Derbyshire at Easter where they had just finished filming Jane Eyre. Can't wait to see it on TV.