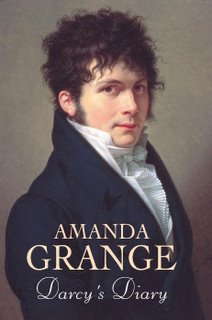 As those of you who have visited my website will know, I worked out a timeline for Pride and Prejudice whilst writing Darcy's Diary. Although there's room for speculation, as Jane Austen didn't give exact dates for most of the events, I worked out that Darcy's meeting with Elizabeth at Rosings was on this day, 13th April in 1800. So here's the extract from the book.

I had seen nothing of Elizabeth since my visit to the parsonage, but I saw her this morning at church. She was looking very well. The early sun has put colour in her cheeks, and brightened her eyes.
After the service, Lady Catherine stopped to speak to the Collinses. Mr Collins beamed as she walked towards him.
‘Your sermon was too long,’ said Lady Catherine. ‘Twenty minutes is ample time in which to instruct your flock.’
‘Yes, Lady Catherine, I—’
‘You made no mention of sobriety. You should have done. There has been too much drunkenness of late. It is a rector’s business to tend to the body of his parishioners as well as their souls.’
‘Of course, Lady —’
‘There were too many hymns. I do not like to have above three hymns in an Easter service. I am very musical and singing is my joy, but three hymns are enough.’

She began to walk to the carriage, and Mr Collins followed her.
‘Yes, Lady Catherine, I —’
‘One of the pews has woodworm. I noticed it as I walked past. You will see to it.’
‘At once, Lady —’ he said.
‘And you will come to dinner with us tonight. Mrs Collins will come with you, as will Miss Lucas and Miss Elizabeth Bennet. We will make up a card table.’
‘So good —’ he said, bowing and rubbing his hands together.
‘I will send the carriage for you.’
I followed her into the carriage and the footman closed the door.

I found myself looking forward to Elizabeth’s arrival at Rosings, but quickly crushed the feeling.
Her party arrived punctually, and because I knew the danger of speaking to her, I passed the time in conversation with my aunt. We talked of our various relations, but I could not help my eyes straying to Elizabeth. Her conversation was of a more lively kind. She was speaking to Colonel Fitzwilliam, and as I saw the animation of her features, I found it hard to take my eyes away.
My aunt, too, kept looking towards them, until at last she said, ‘What is it you are talking of? What are you telling Miss Bennet? Let me hear what it is.’

Colonel Fitzwilliam replied that they were speaking of music. My aunt joined in the conversation, praising Georgiana’s abilities on the piano forte, then mortifying me by inviting Elizabeth to practice on the piano forte in Mrs Jenkinson’s room. To invite a guest to play on the pianoforte in the companion’s room? I had not thought my aunt could be so ill bred.
Elizabeth looked surprised, but said nothing, only her smile showing what she thought.
When coffee was over, Elizabeth began to play, and remembering the pleasure I had had in her playing before, I walked over to her side. Her eyes were brightened by the music, and I placed myself in a position from which I could see the play of emotion over her countenance.
She noticed. At the first pause in the music she turned to me with a smile and said, ‘You mean to frighten me, Mr Darcy, by coming in all this state to hear me. But I will not be alarmed, though your sister does play so well. There is a stubbornness about me that never can bear to be frightened at the will of others. My courage always rises with every attempt to intimidate me.’
‘I shall not say you are mistaken,’ I replied, ‘because you could not really believe me to entertain any design of alarming you; and I have had the pleasure of your acquaintance long enough to know, that you find great enjoyment in occasionally professing opinions which in fact are not your own.’
Where this speech came form I do not know. I am not used to making playful exchanges, but there is something in Elizabeth’s character which lightens mine.
Elizabeth laughed heartily, and I smiled, knowing that we were both enjoying the exchange. So well was I enjoying it that I forgot my caution and gave myself over to an appreciation of the moment.

‘Your cousin will give me a very pretty notion of me,’ she said to Colonel Fitzwilliam. Turning to me, she said, ‘It is very ungenerous of you to mention all that you knew to my disadvantage in Hertfordshire - and, give me leave to say, very impolitic too - for it is provoking me to retaliate, and such things may come out, as will shock you relations to hear.’
I smiled. ‘I am not afraid of you.’
Her eyes brightened at my remark.
Colonel Fitzwilliam begged to be told how I behave amongst strangers.
‘You shall hear all then,’ said Elizabeth. ‘But prepare yourself for something very dreadful. The first time of my ever seeing him in Hertfordshire, you must know, was at a ball - and at this ball, what do you think he did? He danced only four dances!’

In her eyes, my refusal to dance became ridiculous, and I saw it so myself, for the first time. To stride about in all my pride, instead of enjoying myself as any well regulated man would have done. Absurd! I would not ordinarily have tolerated any such teasing, and yet there was something in her manner that removed any sting, and instead made it a cause for laughter.It was at this moment I realized there had been little laughter in my life of late. I had taken on the responsibilities of a man when my father died, and had prided myself on discharging them well as my father would have done. I had tended my estate, looked to the welfare of my tenants, provided for my sister’s health, happiness and education, seen to the livings in my patronage and discharged my business faithfully. Until meeting Elizabeth that had been enough, but now I saw how dull my life had been. It had been too ordered. Too well regulated. Only now did I begin to see it, and to feel it, for the feelings inside me were wholly different from any I had known.