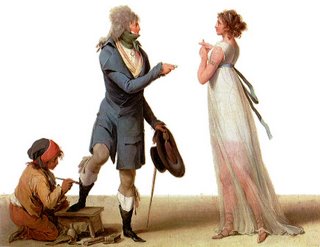 Half past 7
Had a bath in lavender scented water then ate breakfast whilst wearing wrapper, in case I spilled hot chocolate. Then dressed in white muslin gown.
‘I wish it didn’t look quite so demure,’ I said to Melissa.
‘You can always dampen the muslin,’ she said. ‘It’ll make it cling to your legs.’
Melissa is a true friend.

8 o’clock
Took out rags and arranged ringlets artfully around face.

9 o’clock
Went shopping. Bought Mama’s sheets, two bonnets and a length of silk for a new gown. Will have to get a job now because I’ve spent my last penny.

Half past 11
Wet muslin and arranged it round legs in tantalising folds. Hailed a hackney and set out for Winters House.

Quarter to 12
Arrived at Winters House. It is exactly the sort of house I am cut out to live in. It has a marble floor and marble columns and priceless antique vases dotted about. The butler left me in the hall and went to announce me. I took off my pelisse and bonnet then wandered over to a mirror and examined myself in it.
Hair very curly - good - but several hairs out of place - bad.
Started to tweak hair in front of mirror, then turned round to see it from the back. Felt something brush against my gown, caught a glimpse of a priceless vase tottering on top of a stand, spun back in attempt to catch it, and succeeded only in clutching empty air as it crashed to the floor. Stood like a statue as the loudest crash I’ve ever heard in my life echoed around the cavernous hall.
Wished Lord Winters had a tiny hall like everyone else. Also wished he had invested in a carpet.

10 to 12
Unfroze and started to panic. Started frantically picking up the pieces of the vase and looking round for somewhere to put them. Saw a potted palm in the corner and tipped the pieces in the pot. Decided using my hands was too slow and so I scooped up rest of the pieces in my skirt. Held it up at the corners and waddled over to the potted palm. I’d almost reached it when door opened and out walked . . . The Rude Man in the Ante Room. Could only stop and stare, and wonder what he was doing there. Could also not help wondering why I hadn’t noticed how really good looking he was the other day, instead of just thinking he was not bad looking, and seeing that he has a body that looks like it spends a lot of time fencing and in the gym.
Then I realized I was picking up the pieces of a vase I’d just broken, and wondered if I am destined to bump into him at all the worst moments in my life. Also wondered if I am destined to convince him that I am the biggest walking disaster in the world.
‘What the devil are you doing?’ he asked. 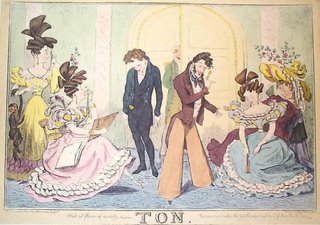 Fortunately I was holding my skirt up at the corners so the broken pieces of china were invisible inside it. Thought quickly and dropped a curtsey, as though I’d been holding my skirt out whilst I waited to do exactly that.
‘Your Majesty,’ I said.
Rude Man looked at me as though I was a half wit.
‘Oh,’ I said, rising, but still holding skirt up at corners. ‘I thought you were the Prince of Wales.’
‘Must have escaped from Bedlam,’ he muttered to himself, as he stalked out of the house.
Pity he’s not a rich earl. Or maybe it’s a good thing. At least I have not made a fool of myself in front of my future husband, but only in front of Very Rude Person who just happens to be Very Nice Looking.

Good to see Charlotte again. She seems to bounce back from every disaster.