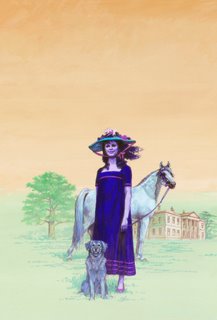 The Social Outcast is my third historical romance and will be published by Robert Hale in February next year. I've just received the final artwork for the cover. What do you think of it?

Eloise Hamilton, a young lady of considerable wealth is, as the title implies, unacceptable to the leaders of society because she is not only the daughter of a merchant banker, but illegitimate, too.

Knowing she's never likely to be welcomed amongst the ranks of the aristocracy, Eloise resists all attempts on her family's part to push her forward and instead happily spends her time riding her horse, accompanied only by her dog, refusing to regret what might have been. When the second son of a duke starts paying her marked attention she is under no false illusions as to the outcome, vowing simply to enjoy Lord Craven's company, even though her lifetime neighbour and friend, Harry Benson-Smythe, suspects that things aren't that straightforward and warns her to be on her guard.

But Harry himself is preoccupied in investigating the mysterious disappearance of several local girls, reluctantly conceding that he must accept Eloise's offer of assistance in order to get to the truth. Only when it's too late does he realise that he's placed Eloise in mortal danger.

Want to know more? Sorry, you'll have to wait until next February. There again, perhaps I'll post a few extracts on this blog in the meantime ...

Wendy Soliman
Posted by Historical Romance Author at 9:48 AM

She's showing a fair bit of ankle. Is that part of her character?