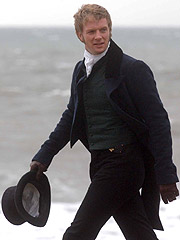 Rupert Penry-Jones will be playing Captain Wentworth in the upcoming TV adaptation of Persuasion, and I'm really looking forward to it.

I don't imagine Wentworth looking like this, myself - if anyone had asked me to cast the part (which, alas, they didnt!)I would have cast Hugh Jackman - but it will be interesting to see what Rupert makes of the part.


Wentworth is one of Austen's most complex heroes. Not only is he a man's man, being a ship's captain, but he's also deeply romantic. He never forgets Anne, even after eight years at sea, and he says to her, 'You pierce my soul' - surely one of the most romantic lines in literature.

Who would you have cast as Wentworth?

Amanda Grange
Posted by Historical Romance Author at 8:47 AM

I think Rupert P-J looks pretty good myself - but that could just be the tight trousers.

Had I been given a free rein to do the casting, I would have chosen Richard Armitage who played Thornton in the BBC adaptation of North and South.

I totally agree. As you say, Rupert P-J looks pretty good but Richard Armitage has those brooding good looks which frankly, do it for me too!

David Boreanaz - though I must admit that he's my stock standard answer for everything and I'm sure ihis absence won't diminsh my pleasure of watching the tv adaption!!!

I see Wentworth as tall dark and handsome. I don't know if Jane Austen ever describes him as dark, but that's how I see him. I would have liked a young Alan Rickman in the part, but then I would like him in anything!

I could see Orlando Bloom as Wentworth. He's about the right age now, and he looks good on a ship!

(sorry for the shouting.)

Tho' Rupe ain't half bad.

Hi ladies - lovely to find your blog. I agree RPJ looks good as Wentworth. Much tastier than Ciarn Hinds although I loved that version. But Richard Armitage is all mine. He is THE reason I - and Rosy Thornton - started writing romance last January and got published this autumn. There is now lots of N&S fanfic - my only try at a historical story was awful but I use Richard as the inspiration for my contemporary novels.

I thought CH was lovely as Wentworth and I loved that version of Persuasion. The only way it could be improved for me would be for Richard Armitage to play Wentworth because he is the only actor I can think of who could bring more to that role and I would personally also have the thud factor as well. Rupert is very nice and will be good I am sure but I don't really need another version without that something extra.

I don't put RA up as a stock standard answer for anything, when people talk of him as Heathcliffe I vehemently disagree. Nor do I particularly want to see him as Darcy or Knightly, (although I could stand it). Only Wentworth because he is a more earthy character particularly suited to RA I feel.

Richard Armitage - My choice of Wentworth