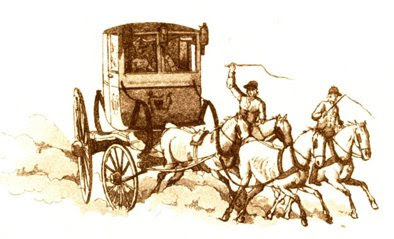 In Jane Austen's Pride and Prejudice, we learn that Lydia Bennet runs away with Mr Wickham. I always wondered how Mr Wickham and Lydia finally came to be together in Brighton and how he persuaded her that it was a good idea to elope. I don't want to spoil their story by revealing all, but here is an extract from a scene prior to their elopement. I used the Lydia letter that Jane Austen wrote but we see the scene through Lydia's eyes as she is writing to her friend Harriet. She is excited and so in love with her 'angel' that all she can think about is how they can be together at last.

Lydia ran to her room, retrieved her bundle and was about to go, when she was taken by the idea that she could not disappear without leaving Harriet with a hint of where she had gone. She sat down at the desk in front of the window to compose her letter. As she reached for her pen and dipped the quill in the black ink, she was overwhelmed by a desire for mirth. She tried to steady her nerves, breathing the salt tang coming in off the sea, but her laughter rose inside her to erupt into the silence of the room. The muslin at the bow window, caught by a sudden gust, snapped and flapped back, rattling the curtain rings, shaking the blinds. Lydia paused to look out through the glass at the grey clouds massing over the sea and heard the sound made by the waves as they crashed and churned; water sucking up the stones and dashing them down again on the beach below. A summer storm was brewing, but did nothing to dampen her excitement. She could hardly believe that the time to depart had arrived.

She started to write:

Dear Harriet,
You will laugh when you know where I am gone and I cannot help laughing myself at your surprise tomorrow morning, as soon as I am missed…

She hesitated as a resounding clap like a cracking whip tore across the heavens, lighting up the sky in sulphurous tones, before a roll of thunder crashed overhead. At once the rain began, blowing large, fat droplets across her missive, smudging and dissolving the ink, extinguishing the candle she had lit to provide more light against the dim evening. She stood up and lowered the window, taking in the scene below as figures dashed for cover from the tumultuous downpour. Carriages were arriving, bringing their pretty passengers to dance at the Assembly Rooms below. A girl, shivering in sheer muslin, alighted from a phaeton with her beau and was buffeted along by the wind, which whipped at her legs and threatened to snatch her bonnet. Some high-spirited young men leered enthusiastically at a trio of females who left them in no doubt of their mutual interest as they passed by. Coachmen turned up their collars, pulling down their hats and fastening close their carriage hoods against the unseasonable squall. Satin slippers were soaked through in seconds and shawls clutched tightly in an effort to stay dry, as another coach-load of ladies ran from the streaming gutters, shrieking and hopping through the puddles.

“Lord, what fun! What delights have been mine whilst here,” mused Lydia. “I will never forget my time in this pleasure haven. I could never have imagined, when I begged mama to let me go dancing with my sisters all those months ago, that my life would change so much, that I would not only be in love, but with the dearest and most handsome man in the whole world.” She felt another wave of sheer joy, mixed with the hope that her dreams were at last to be realised, and she laughed again to relieve the feelings bubbling inside.
But there was no time to stand and ponder, especially when her eye caught sight of a certain young Captain she wished to avoid running out across the road. She quickly drew back behind the curtain, returning to the desk to resume her letter.

I am going to Gretna Green, and if you cannot guess with who I shall think you a simpleton, for there is but one man in the world I love, and he is an angel, I should never be happy without him, so think it no harm to be off. You need not send them word at Longbourn of my going, if you do not like it, for it will make the surprise the greater when I write to them, and sign my name Lydia Wickham. What a good joke it will be! I can hardly write for laughing. Pray make my excuses to Pratt for not keeping my engagement and dancing with him tonight. Tell him I hope he will excuse me when he knows all, and tell him when we next meet at a ball I will dance with him with great pleasure. I shall send for my clothes when I get to Longbourn; but I wish you would tell Sally to mend a great slit in my worked muslin gown before they are packed up. Goodbye. Give my love to Colonel Forster. I hope you will drink to our good journey. 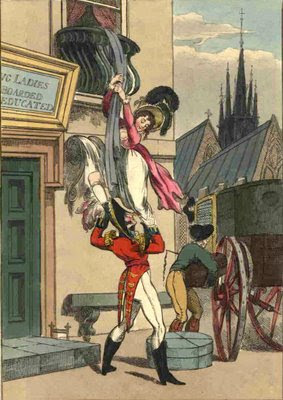 Was the print from a How To manual?

It's a gorgeous print isn't it? I have to admit, that's not quite the way Lydia does it, but I couldn't resist it!

You bring her vividly to life, Jane, as a giddy and thoughtless girl. I liked the print too.