Not Quite Gardener's World - getting distracted amongst the Brussel Sprouts

I was checking the proofs for A Mistletoe Masquerade, my contribution to the Mills & Boon Christmas anthology for 2008, yesterday and was reminded of my search for the Regency Brussel Sprout.

Did they grow them, did they like them? That was the question. There was no sign of them in Thomas Mawe's Every Man His Own Gardener. My copy is the 14th edition - 1794 - and I didn't think veg growing would have changed that much in twenty years. Then I thought of checking in Grandfather's copy of The Cottage Gardeners Dictionary (1852, but then Grandpa was not given to the new-fangled and this had probably been his grandfather's copy.) And there it was - Brussels Borecole or Sprouts. Back to Mawe and sure enough - both Brown and Green Borecole "...greatly esteemed, for their being so hardy as to resist the severest cold; and they eat extremely sweet, but especially the sprouts which arise from the sides of the stalks."

I should have gone back to my proofs at that point, having checked the spelling and made sure the gardener's boy was doing the right thing with them, but any distraction is welcome when there are proofs to be read. What about recipes? I have four original cookery books for the early 19th century and not one has anything for Brussels Sprouts, Borecole or Cole. Perhaps the traditional method of boiling them until dead dates back to then, or perhaps it was just too simple to require spelling out.

OK, definitely time to get back to the proofs... But then I found myself looking for images of Regency gardens. While the professional gardeners were toiling in the vegetable garden it seems the gentry were indulging in a little recreational gardening themselves. I collect Regency bat-printed china (nothing to do with flying mammals, it has black and white printed images created by pressing a specially coated 'bat' onto the cup or plate) and many of those feature garden scenes. 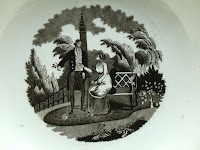 The handsome gent presenting his lady with a rose isn't, when you look at it carefully, doing anything so romantic. What he is holding is a cutting - no wonder she looks decidedly underwhelmed.

And even ladies were gardening. How much they actually did outside, other than dead heading the roses, I'm not sure, but here is an earnest young woman tending her pot plants. Her outfit, illustrated in Ackermann's Repository (September 1820) is apparently "Cottage Dress" - a nice simple affair for getting amongst the weeds in!
And now, definitely time to get back to those proofs!