Putting One's Feet Up With a Nice Magazine... 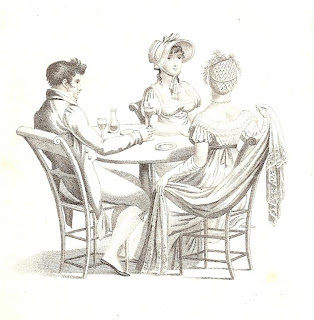 We all do it, usually when we ought to be doing something else more exciting, like the ironing. There’s nothing quite like snatching half an hour with a magazine, whether its Heat, Vogue or the Pig Keeper’s Weekly.

But what would the fashionable lady be reading in 1807 while she sipped her chocolate? I’ve just bought some copies of La Belle Assemblée, or Bell’s Court and Fashionable Magazine and I settled down with my tea to peruse August.

The illustration is of A Fashionable Party at the Frascati, Paris. I rather suspect he has realised his companions are simply refuelling for another lengthy shopping expedition and he is going to be dragged along too.

The fashion plates are well known, but it had more than news of the latest gowns. There was a long running series of Biographical Sketches of Illustrious Ladies, this one featuring the Queen of Prussia - Handsome in her person, accomplished in her manners, but apparently fatally flawed by indiscreet dealings with Napoleon. This is followed by a tour of Hamburgh [sic] and Bremen, with special emphasis on the food …a comfortable dinner, a bottle of wine included, may be had for twenty pence English;
A Curious Account of Two Elephants which comments that mating in elephants …is now ascertained beyond the possibility of a doubt to be exactly similar to the horse – it must have removed a worry from many a fashionable lady to know that; a communication from An Old Bachelor on the servant problem; a history of French fashions and speculation on The Occupation of Departed Souls.

More familiar to the modern reader is the cookery section which after commenting that dessert is to a dinner what the sky-rockets are to fire-works, gives the recipe for Soup à la Camerani for which one requires real Neapolitan macaroni, Epping butter, Parmesan cheese, capon livers, celery, carrots, parsnips and leeks. Would the fashionable hostess worry that her butter came from the farm down the road and her macaroni from the nearest market town? Would anyone have noticed?

The poetry section is lengthy and includes such cheerful items as Maria: or a Mother’s Dirge and The Tomb of My Fathers: a Pathetic Ballad set to music (Note: to be sung Andante et Affecttuoso).

Rather more cheerful for the romantic novelist is The Cottage: to Isabella
Oh share my cottage gentle maid,
It only waits for thee,
To give a sweetness to its shade
And happiness to me.
Luxurious pride it cannot boast,
‘Tis all simplicity,
No perfumes from Arabia’s coast,
Nor glitt’ring gems thou’lt see… 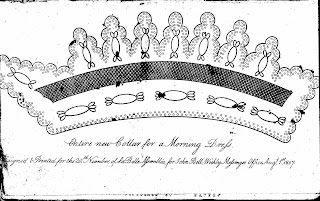 The free embroidery pattern is for an Entire New Collar for a Morning Dress and the whole issue is rounded off with advertisements for various indispensable items:
Collyer’s Silk Stockings with cotton feet – comfort, ease and durability, pleasantness , economy and utility are combined.
The incomparable Vegetable Cream de Sultanes produced by J Delacroix after a variety of chemical Experiments and intense application. For 4/6d a bottle the effects of sunshine or chilling winds may be reversed.
New and Popular Vauxhall Songs available at 1/- each included The Squeeze of the Hand, The Young Gypsy has Conquered My Heart and the ever popular One Evening Sitting Garters Knitting (as sung by Mrs Bland).

Tooth whitening preparations were obviously much in demand and if all else failed one could be fitted with Faleur and De Lafon’s Improved Mineral Teeth.

And finally, what I can only assume to be the Viagra of its time:
Sir Hans Soane’s Restorative and Re-Animating Pills for those distressing Debilities which prevent, or render unhappy, the Marriage State (but cannot, with a due regard to delicacy, be mentioned in a public magazine. The afflicted could send off for a helpful pamphlet for 1/- or purchase a box of pills for 10/6d. Sadly, there were no testimonials from those re-animated.

Louise Allen
Posted by Historical Romance Author at 10:25 AM

Fascinating stuff, Louise - and not that different from today's periodicals with their knitting patterns and recipes.

I am off now to whip up a dessert with some Epping butter before spending an evening knitting garters while the family sing A Mother's Dirge to me!

I loved reading that, Louise. It just goes to show that while centuries pass and fashions change, human nature, women's interests and gentlemen's concerns (!) have changed hardly at all.

Wonderful, Louise! But where were the short stories and the serial???

As for re-animating one's debilities for only 10/6 - bargain!