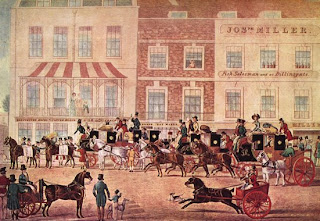 Regency romance fiction often has an incident or event taking place in a country inn in England. The first thirty years of the nineteenth century saw the growth of such hostelries as the rise of coach and post-chaise travel expanded and peaked.
I really like to read contemporary descriptions which help inspiration for writing. The first is by the English writer, George Borrow.
...an army of servants... was kept; waiters, chambermaids, grooms, postillions, shoe-blacks, cooks, scullions, and what not, for there was a barber and hair-dresser who had been at Paris, and talked French with a cockney accent...Jacks creaked in the kitchens turning round spits, on which large joints of meat piped and smoked before great fires. There was running up and down stairs, and along galleries, slamming of doors, cries of "Coming, sir," and "Please to step this way, ma'am," during eighteen hours of the four and twenty. Truly a very great place for life and bustle was this inn. 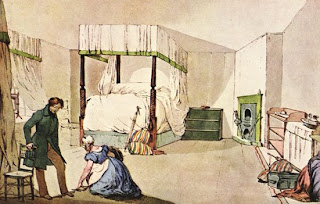 The next description is from an American writer, Henry Tuckerman.
The coffee room of the best class of English inns, carpeted and curtained, the dark rich hue of old mahogany, the ancient plate, the four-post bed, the sirloin or mutton joint, the tea, muffins, Cheshire and Stilton, the ale, the coal-fire and The Times, form an epitome of England; and it is only requisite to ponder well the associations and history of each of these items to arrive at what is essential in English history and character. The impassable divisions of society are shown...the time-worn aspect of the furniture is eloquent of conservatism; the richness of the meats and strength of the ale explain the bone and sinew of the race; the tea is fragrant with Cowper's memory, and suggestive of East India conquests; the cheese proclaims a thrifty agriculture, the bed and draperies comfort, the coal manufactures; while The Times is the chart of English enterprise, division of labour, wealth, self-esteem, politics, trade, court-life, "inaccessibility to ideas" and bullyism.

I can think of a few inns still existing today which still embody most of the above and where, as you walk in, the ghosts of the past seem thick in the air about you.

The top print shows the west country mails at the Gloucester coffee house, Piccadilly, an engraving after James Pollard, and the second shows a bedroom at an inn from Eugene Lami's Voyage en Angleterre, 1830.

Jane Odiwe
Posted by Historical Romance Author at 7:07 AM

I do love your posts, Jane. Information and illustration, perfectly combined.

What lovely evocative extracts, Jane. Travel must have been quite a test of endurance - just imagine how thankful the passengers would be to stop at an inn, however noisy!
Melinda

I just discovered your Beautiful! website. We in the U.S. many inns similar to the one above. I am the author of iLoveInns.com and 60 Bed and Breakfast books. Mammoth Plantation in Natchez, Mississippi is one inn similar to the above. Canopy beds abound and is the mark of a superb inn. We have 19,000 B&Bs and Country Inns here and many participate in our Buy-One-Night-Get-the-Second-Night Free.

I loved these extracts - and I think the print showing the interior of what I imagine is a typical room is great for its detail. Aren't the steps to climb up on the bed a hoot?

I wonder if the blue section beneath the bed is a "truckle bed" - to pull out for a servant to use????
Melinda