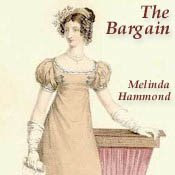 The Bargain was originally published by Robert Hale Limited in Hardback, and is also available in large print and i am delighted that it is now also available as an e-book. I had great fun writing this one - I love my tall dark and dangerous hero, the Earl of Aldringham but he has met his match in the lovely Melissa Langham. She may be forced to marry him, but when his behaviour becomes too outrageous she takes matters into her own hands, as this extract shows.

When Melissa entered the house she could hear the noisy chatter and laughter coming from the great hall. She was about to enter when a discreet cough made her pause. Mrs Borster was standing in the doorway to the servants’ quarters. Melissa turned towards her, saying cheerfully, ‘What is it, Mrs Borster? Has the cook walked out at the news of so many unexpected guests?’
The elderly housekeeper drew back and, intrigued, Melissa followed her along the passage to the kitchen. She nodded at Borster, who was sitting by the window, engaged in cleaning the earl’s carriage pistols.
‘Well, Mrs Borster, what is it you want to say to me?’
‘Well my lady, I thought perhaps you should know, before you join them.’ The older woman shifted her gaze. ‘The party isn’t what you might call … seemly.’
Melissa frowned. ‘Who is with my lord?’
The housekeeper moved from one foot to the other, looking even more agitated.
‘Well, there’s Mr Courtenay, who was here yesterday, and a couple of gentlemen from the village, and - and some females who have no right to be in any respectable house!’
Lady Aldringham turned on her heel and walked briskly to the great hall. At her entrance the noise abated, and for a moment Melissa thought she had wandered into a nightmare.
Aldringham, she noted with relief, was lounging in a chair alone, with a half-empty glass in his hand. Mr Courtenay was sitting in one of the armchairs, a very painted lady on his lap, whom Melissa judged to be at least twice his age. There were three other gentlemen in the room, all very young. One of them was engaged in drinking wine from a lady’s rather soiled slipper while its owner perched boldly on the edge of the mahogany table. The other two young men were lounging on a sofa with another untidily dressed woman between them.
Melissa took it all in at a glance, her anger growing, then, without a word, she turned and whisked herself out of the room. As she closed the door behind her, she heard her husband’s harsh, mirthless laugh ring out across the room. Eyes flashing angrily, she walked quickly back into the kitchen.
‘Borster, can you load those pistols for me?’
‘Load them, my lady? But—’
‘Well?’
‘Well ... yes, ma’am, but I don’t see—’
‘Then you will load them for me at once, do you hear? You, boy!’ She pointed at a young stable-lad who had just brought in a basket of logs. ‘Bring me the whip that hangs on the stable door. The big one!’
The boy goggled at her, but seeing the determined look in her face, he tugged his forelock and disappeared at a run. Borster looked at his wife askance, but at her nod, he began nervously to load the pistols.
‘There, my lady, but I beg you will take care!’
Melissa checked the weapons.
“You need not worry, Borster. I was used to be a very good shot. Now, order the carriage and horses for our guests.’
The stable lad had returned with the whip, and Melissa carefully placed one of the pistols in her pocket. She took the whip in her left hand, the other pistol held firmly in her right. Thus armed she stepped purposefully back towards the great hall.

Melinda Hammond
Posted by Historical Romance Author at 9:46 AM

Melissa is my kind of woman. Where is the e-book published?

Linda, The Bargain e-book is with Rgency reads (www.regencyreads.com): they have published several of my books and I hope will have some more shortly!

Why didn't I see this post before? A fabulous start to a book, Melinda!