One of my Christmas presents this year was a DVD of Lost in Austen. So last Sunday afternoon I sat down at my computer (the TV was hijacked by family members) and watched the 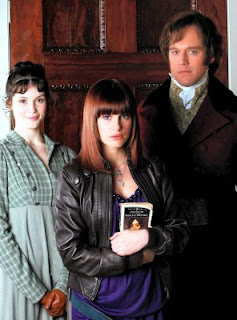 four-part series all in one go.

I think it’s only when you see all the episodes back to back that you realize how very clever it is. Because it really sucks you through that bathroom wall and into Eliza Bennet’s new/old world. Lost in Austen could easily have become a caricature of Pride and Prejudice. Just a touch more exaggeration or a heavier hand with the comedy, and it would have gone overboard. Instead, by being restrained, it takes Pride and Prejudice seriously enough to be a true tribute.

Of course you have to suspend disbelief to even watch it. People don’t step out of their bathrooms into Regency England. But wait – it isn’t Regency England. Amanda steps through her bathroom into a novel. Now that’s pure fiction.
But the funny thing about the whole film is that Lost in Austen manages to persuade us that P&P isn’t fiction, it’s somehow real. I had quite a jolt when Amanda tore a copy of Pride and Prejudice into pieces and threw it into the pond. Somehow, I didn’t want a reminder that P&P is just a novel.

Hats off to the actors. These actors had to play their roles on many levels it makes me dizzy to think of it. They had to be the original P&P characters, while at the same time, they followed a completely different script. Added to that, they had to work around the intrusion of the modern world into a period drama in the figure of Amanda, who constantly reminds them that there is a world beyond Jane Austen. Yet they not only pull it off and portray characters who are convincing, but they even add new dimensions to the JA’s characters. We believe them to be people from Pride and Prejudice, and the thrill of watching the drama is to see how these people who are so familiar to us will react to the new and unexpected twists in the plot. They were so convincing that fans on any number of websites have been voting to see which of the actors – Colin Firth, Matthew Macfadyen or Elliot Cowan portrays Darcy best. 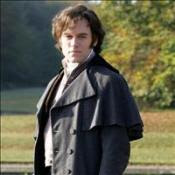 Hold on a minute – Elliot Cowan didn’t do Pride and Prejudice!

I emerged from my three-hour stint squint-eyed but full of admiration (in case you didn’t notice). As a postmodern take on Austen, Lost in Austen succeeds in being lots of things at once: a spoof, a loving tribute to Austen, a time-travel tale, a reinterpretation of Austen’s characters, a critique of the social restrictions of regency England, a parody of other Jane Austen film adaptations, and, strangely enough, and most importantly, a romance, with Darcy as the hero.

Mr Darcy (played so skillfully by Elliot Cowan -- I swear his eyes kept changing colour with different emotions) emerges from this unlikely production still very much the romantic hero – not only the hero of P&P, but of Lost in Austen as well – dripping with water and magnetism, of course.

Though I admit to finding Wickham (the new and revamped version) very appealing indeed.

Monica Fairview, whose THE OTHER MR DARCY is coming out in June 2009.
Posted by Historical Romance Author at 7:45 AM

I loved this too Monica - it is very clever and funny. Mr Darcy is lovely, but I just love Hugh Bonneville in this production - his Mr Bennet is superb! All the cast were really good and for once Lydia was the right height and looked buxom enough (and I mean that in the nicest possible way).

What an interesting assessment, Monica. I would like to watch the whole series again now that I've read your critique! I remember finding the series very witty and clever at the time - and I agree with you over the new, improved Wickham. He very nearly stole the show for me!

Interesting post, Monica. I agree with you and with Nicola about Wickham - perhaps it's time someone gave him a book of his own - it's not unknowne for the villain to be appealing - remember the Flashman series? Lost in Austen DVD is on my wish list for Mother's Day!

Gosh, yes, Flashman is an interesting example, Melinda. I remember reading some of those books and thinking how appallingly he behaved and yet at times the character was very attractive. Great skill on the part of the author, I think. And what a brilliant idea to give Wickham his own book!

I loved this series too. I was very dubious when I first heard about it, but it was brilliantly written, and very funny.

Of course as Monica says, you have to suspend belief when watching it, and the only thing I didn't quite beleive was that Mr Collins would keep his hands off Jane after they were married.

However, that aside, I loved the scene where Amanda sings "Downtown". Just classic! Also loved the slight evil edge Mrs Bennett had. Hugh B - love him, and as you all said Wickham was great too.

Usually ITV programs are a bit dodgy imo, but not this one!

I agree that Hugh Bonneville as Mr Bennet is brilliant. A lot of care went into the casting, I think. And "Downtown" was hilarious! Mr Collins' abstention *was* unexpected, but necessary for the plot, I suppose. Though he was so disgusting, with that sniffing his fingers trick, that I for one was relieved Jane didn't have to put up with him!

My book club watched the Lost in Austen DVD's as a group and found them quite appealing! We've now read all of Austen and are moving on to Jane Eyre, by the way.

Great Review. I can't wait to watch it now. I have a friend who got her hands on a copy while in the U.K. She has invited me to come watch. YEAHHHHHHH

Loved it! Elliot Cowan certainly giving Colin Firth and run for his money. In fact I think I shall now go and watch it again as I do my ironing!

The JA website i used to frequent put LIA down so badly, i only watched portions of it in youtube recently during a period of sheer boredom.
But Cowan's portrayal of Mr. Darcy was very captivating, (even if his pond scene were to be excised), that am debating whether to get this as a gift to self.
It was as most of you commented - a hilarious but fine tribute to JA, but that is something i can only post here and anonymously at that.

My daughter just got this DVD out of our public library.... we watched it yesterday. So funny!!!!! and Elliott Cowan is rather hot!

All I can say is "WOW"! I loved this version of P&P with a twist! Mr. Darcy was very yummy to look at and I loved the way it ended although I wish there was more.

I loved the new story line. Surely they kept putting a spin on every corner Amanda turned. Ms Rooper was wonderful. Elliot crept into my heart as well. I thought no one could ever surpass Colin. I so wish there will a spinoff of the Darcy's Family he and Elizabeth or Amanda w/ kids,and wouldn't that be a tale to tell.