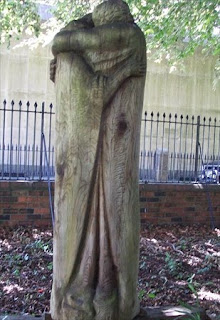 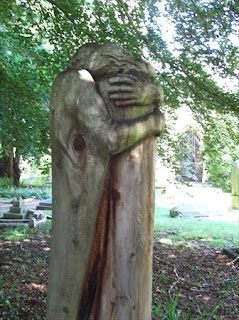 This beautiful carving was created in 2006 by Bulgarian sculptor Pencho Dobrev during an Arts festival in Caerleon near Newport in South Wales. Artists in wood from all over Europe took part and many of the sculptures were moved to adorn various gardens and public spaces. But this one remained alone and neglected, in a field near the river where the competition had taken place. So when I returned to Caerleon a few weeks ago I was delighted to see it had been moved.
Since the earliest days of the human race men have carved images using stone, wood or deer antler. Sailors spent their off-duty hours creating scrimshaw: detailed pictures and lettering on walrus tusks or whale teeth. The Chinese and Indians used ivory; taking hundreds of hours to create elaborate ornaments and jewellery. Michaelangelo's David and the Pieta are magnificent, marble almost transformed into flesh.
But for me this image, hewn out of a single trunk, is one of the most beautiful and moving I have ever seen. The carving speaks of loss and grief, of comfort offered and strength drawn from loving arms. It symbolises the pairing of man and woman, and the uniting gift of love. It is timeless. Where is it now? Standing beneath a massive beech tree in St Cadoc’s churchyard. Which seems to me the perfect setting.

Jane Jackson.
Posted by Historical Romance Author at 8:00 AM

It is rather lovely, Jane. I must remember to go and have a look at it next year.

Fortunately, Caerleon is only about 12 minutes walk from the campus - and it has the best preserved Roman amphitheatre in the country as well, not to mention a great museum and the remains of what must once have been a huge Roman bath complex.

This image is so compelling and heart searching. By staring at it so many emotions and questions spring to mind and the novelist's inspiration reaches out to create a story around them.

Lanzy gives you Celebrities images, wallpapers pictures. These pictures are beautiful Images Of Love and save it for you desktop Wallpapers and screen savers. Ill shall update my website with latest HD Wallpapers, pictures, Images. Enjoy by visiting my website.