Regency Surgery - Not For the Fainthearted! 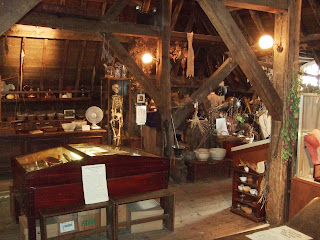 I often think that the Regency would be a wonderful period to live provided I had a lot of money, no social conscience and the best of health. The unpleasant consequences of being unwell were brought home forcibly the other day when I visited the Old Operating Theatre Museum and Herb Garret at St Thomas’s Hospital in Southwark. (http://www.thegarrret.org.uk/)

In 1703 St Thomas’s church was built as part of the hospital and the roof space was taken over by the hospital’s apothecary to dry and store herbs and to make up remedies.
Amongst the less appetising cures is Snail Water, used as a remedy for venereal disease. The recipe is as follows:
Take garden snails, cleansed and bruised, 6 gallons
Earthworms washed and bruised 3 gallons
Of common Wormwood, Ground Ivy and Carduus [cardoon] each one pound and a half
Pennyroyal, Juniper-berries and Fennelseeds each half a pound.
Cloves and Cubebs [pepper-like berry] bruised, each 8 gallons
Digest them together for the space of 24 hours and then draw it off in a common Alembick.
Keats was an apothecary student here and opposite the church is the site of his lodgings. He qualified but never practised. 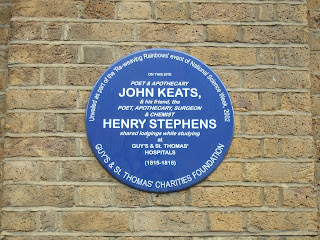 St Thomas’ was a charitable hospital so most of its patients were too poor to pay for medical treatment. Anyone who could afford it would be treated at home, including having surgery performed, and, in the absence of any understanding of the causes of infection, this was probably a wise choice.
Patients were strictly segregated by sex, even when they were operated on. The men’s operating theatre does not survive, but in 1822 part of the roof space of the church was converted into an operating theatre for women. The entry then was through a now closed door and not, I was relieved to discover having climbed them, by way of the steep and narrow winding stairs that are the only way into the garret these days. 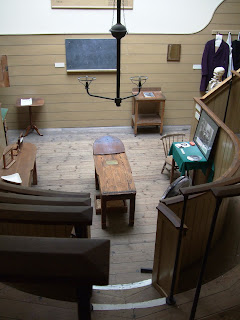 The new theatre was made with tiers where medical students and dressers (the surgeons’ assistants) could stand and observe the surgery. A skylight was created in the church roof to light the space and the floor had a gap between its boards and the ceiling below. This was filled with sawdust to prevent blood dripping through into the church.
It must have been a terrifying experience to face surgery with no anaesthetic and in the midst of a crowd of students all craning to see what was going on.
The museum’s information sheet quotes surgeon John Flint South (1814)
…the first two rows…were occupied by the other dressers, and behind a second partition stood the pupils, packed like herrings in a barrel, but not so quiet, as those behind were continually pressing on those before…There was also a continual calling out of “heads, heads” to those about the table whose heads interfered with the sightseers…
An original wooden operating table is still there – not so bad, until you look closely and see the cuts in the wood, just like those on a butcher’s block, where the saws and knives had cut through flesh to the wood below. 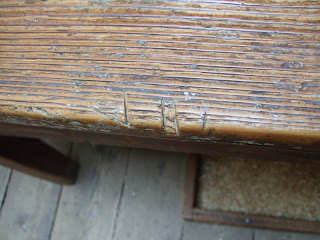 Under the table was a box of sawdust. The surgeon would kick it so it was underneath the worst of the bleeding and someone stood by to replace it when it would absorb no more.
As well as the blood-loss and pain there was a terrible risk of infection. The surgeon would operate in his ordinary clothes, merely changing his coat for another kept just for operations and rarely cleaned or changed. You can see an operating coat hanging by the door in the first view down into the theatre. 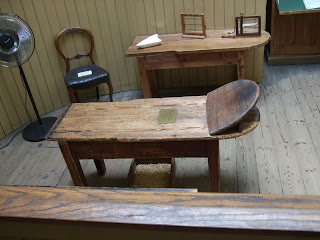 Outside the operating theatre is a collection of early surgical instruments – not much more cheering than the theatre itself, but with their own horrible fascination.
It was a relief to creep carefully down the twisting stairs in the church tower and escape into the foodie haven of Borough market, although oddly, my appetite was rather poor!
Posted by Historical Romance Author at 5:00 AM

I think it must have been horrific for everyone involved; the patients, the doctors, the assistants and any family members assisting. One of my favorite books of all time is 'With This Ring' by Carla Kelly, in it the hero has to undergo surgery several times to remove the remains of his uniform that was embedded into his back and shoulder by a French bayonet. The scene where he undergoes the last surgery makes me cry every time!

There's a picture at the museum, presumably from a medical text, showing a man bravely braced for surgery and then, thankfully, passed out a while later. It's really horrible to think about, but it was part of the reality and as an author I tell myself I ought to understand it. Shudder.

I visited the operating theatre and herb garret many years ago, and your interesting post brought it all back.

I particularly remember the wonderfully herby - and healthy - smell in the herb garret and the bunches of herbs suspended on hooks from the beams.

Heaven knows what the operating theatre must have smelt like - I don't remember much in the way of ventilation.

Fabulous post and photographs. They were gory times indeed and I always have to brace myself with a medicinal brandy on hand before delving into writing an historical medical scene. This seemed primitive enough but imagine how much worse it was for sailors during a battle.

There are some fantastically gruesome medical museums around - I used to work at King's College London and some of the pickled body parts in the Guy's Anatomy Museum (http://www.kcl.ac.uk/teares/gktvc/vc/gordon/gallery.html) were not for the faint hearted. The Surgeon's Hall Museum in Edinburgh is another cracker - I was literally wincing walking round their exhibition on dentistry! Ouch!