I spent a great day earlier this month at Ickworth House with fellow Regency author Annie Burrows. We'd gone to see the 95th Rifles holding their first training camp of the year and they were also being filmed for the http://www.waterloo200.org/ website where there is lots of information about the build-up to the 200th anniversary of the Battle of Waterloo.

At Waterloo there were a wide range of nationalities represented amongst the Allied troops. Below on the left are a group of Brunswick troops with their gruesome skull and crossbones cap badges and black horse tail plumes talking to a couple of Riflemen. Soldiers from a Scottish regiment can be glimpsed behind. 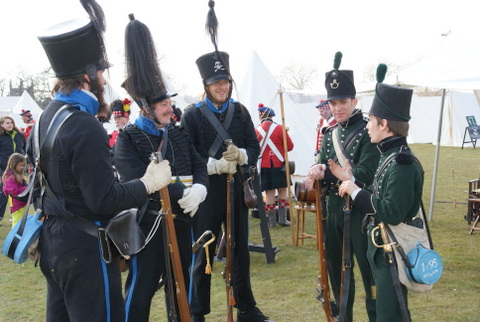 And finally here are the French, marching back to camp after a hard day spent being shot at for the film makers! You can fidn out more about the 95th Rifles at www.95th-rifles.co.uk 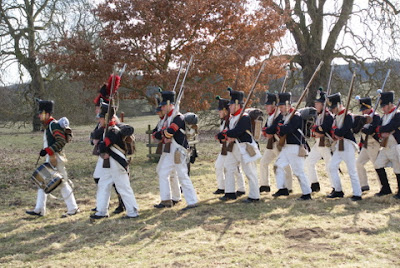 What a wonderful experience, Louise! Lucky you.

Great post, thanks, Louise. So great to be able to be part of such an even.

Elizabeth, I am pretty sure the 95th was Harry Smith's regiment - it was certainly the regiment of Capt John Kincaid,who wrote up his entertaining anecdotes of life as a rifleman from 1809 to 1815

Indeed it was Harry Smiths Regiment, during the Peninsula War in Spain. At the siege of Badajoz he rescued a well bred Spanish girl of 14 years who became his wife and never left his side. The town of Ladysmith in South Africa is named after her. He also led the funeral cortege for the Duke of Wellington, there is a great book about his life - 'Remember You're an Englishman'. Cleaning the graves of Sir and Lady Smith was one of the duties as a pupil of Sir Harry Smiths Community College, Whittlesey.

PS. He was always dashing about on his horse, his nickname in South Africa was 'Hurry Whackalong Smite' (Harry Wakelyn Smith)

Unknown said...
This comment has been removed by a blog administrator.
10:22 PM