You’ll have to excuse me, but I’m going to “lower the tone” a bit now and talk about male cover models.  The topic is fresh in my mind, as I’ve just attended my first ever RT Booklovers Convention in Kansas City, Missouri – a very interesting experience! 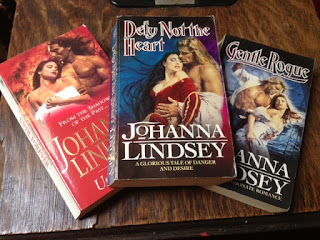 In the 1980s when I first started buying historical romantic fiction, most of the ones I liked came from the US – Johanna Lindsey, Kathleen Woodiwiss, Shirlee Busbee, Catherine Coulter to name but a few.  They all had covers with a couple in a clinch, the woman usually looking adoringly up at a bare-chested man (more often than not various versions of the model Fabio or his clones) and I became used to that.  It didn’t bother me as I would have bought the books no matter what was on the outside, but I thought it was a trend which would quickly die out and be replaced with something else. 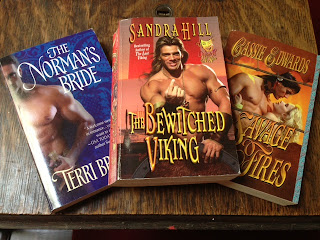 Not so – the half-naked men covers are still alive and well, particularly in the US where they seem to be the norm for a lot of romance genres.  They just seem to be a bit edgier these days.

This was made clear to me at the RT Convention.  The first things I saw upon arrival were lift doors with such book covers on them and key cards with a picture of a man’s naked torso.  And a lot of the covers of books for sale during the convention (and in the goody bags) still featured men in various states of undress.  Whether they were Regency rakes, cowboys or shapeshifters, none of them seemed to own a jacket, let alone a shirt!

In the UK, I hear a lot of disparaging remarks about these types of cover, but are they really so bad?  Ok, they’re a bit clichéd, but then so are the “headless” Tudor women of the historical novels over here.  They fulfil a function, which is to tell the reader what kind of book is inside the covers and I, for one, don’t mind having a bit of “eye candy” as a bonus.  Granted, most of them are not my type and I prefer to use my own imagination to picture what the hero looks like.  But very occasionally you come across one who really makes you sit up and take notice – that can be nice :-)

The RT Convention is known for its cover model pageants and for always having such men present.  This year was no exception (apart from the fact that they didn’t have a pageant and most of them were a lot older than I had thought!) and they seemed like a nice bunch.  Friendly, smiling, always willing to chat or have their photo taken, and happy to take part in anything the organisers asked of them.  They took their duties seriously and were trying their best to make everyone enjoy the convention.  They even dressed up for the Freaky Friday party and danced the night away with everyone else.  And these days they seem to be very savvy – a couple of them had tables at a romance fair, offering their photos for sale to authors who are self-publishing.  So not just the male equivalent of bimbos but businessmen as well!

So – love them or loathe them?  I’d love your take on these covers, because it seems to me they are here to stay.

As a "mere male" the "big hair-Fabio clone" is more likely to put me off than get me to buy a book. As a long-time Georgette Heyer fan, her covers have generally gone down the "old masters" route.

There ARE exceptions, of course - remember the old "Angelique" series.

Sorry John, I was looking at it from a purely female perspective! Of course, some of those covers also have gorgeous females, which would hopefully appeal to male fans of the genre? But I do like other types of covers too - as I said, I read the books because I like the stories and I'm not too bothered what's on the outside :-)

I loathe, with a possibly unrequited, passion, those topless men. Maybe it's because I don't like the type of romance that is 'all about the dreamy guy...sigh', but I find myself thinking -turn the tables for a moment, girls. How would we feel if 'Men's Fiction' featured headless girls with their chests out? Would we scream 'sexism' or would we placidly admit that it sold books?

I'm with Jane on this one. Half-naked men on book covers don't do it for me. They look too 21st century, for a start. I prefer the heroes in my imagination.

I love the covers Arthur Barbosa did for most of Georgette Heyer's novels; they were both classy and absolutely of the period.

There is definitely something to be said for being allowed to use your own imagination to picture the hero in your mind! (Especially when the ones on the covers don't bear any resemblance to the description inside). Can't say I loathe them though, I don't mind either way. And don't a lot of men's fiction feature just such girls, Jane?

I love them. Since I'm with American publishers, many of my covers are the shirtless male variety. They sell books, no question. Historical romance is tricky, there are very few photos with historically accurate clothing, so naked and draped in something like a sheet is safer.
Saw you with CJ in one of his outfits. Nice guy. In the 80's and 90's, Fabio was the blond, John de Salvo the brunet. Did you get an Ellora's Cave calendar? I have one picture that's the inspiration for my WIP!

No I didn't get a calendar, Lynne, but I did take some photos of posters around the place - some very "inspirational" ones I have to say :-) And yes, CJ seemed like a really nice guy - not so sure about the outfit though!

Fenella J Miller said...
This comment has been removed by the author.
2:28 PM