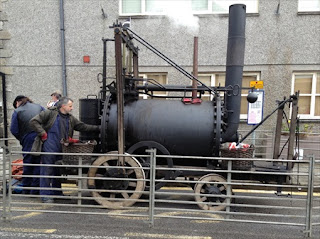 Richard Trevithick was a brilliant Cornish mining engineer who invented the first tube system boiler to use high pressure steam, and the world's first self-propelled locomotive. So why for 200 years have people believed James Watt to be the pioneer responsible for those two inventions?  Because Watt and his partner, Matthew Boulton, had the advantage of being shrewd businessmen.

When James Watt first heard about the new tubular boiler he publicly claimed that Trevithick should be hanged for creating something so lethal. And it was lethal – mainly because the quality of metal available at the time, and the rivets used to bolt the plates together, were simply not strong enough to withstand the enormous pressures.  Trevithick also invented a safety valve for the boiler – after he left one of his engines on a cart outside an inn where he remained drinking for several hours, and it blew up.
High pressure steam cut coal consumption by four fifths, which was a huge financial saving. So after the new Cornish high-pressure steam boiler proved to be successful, Boulton & Watt registered patents which, for over 40 years, made further development by any other engineers impossible. Any attempts to work round these provoked immediate threats of litigation.
Richard Trevithick’s fertile mind meant he invariably worked on several inventions at the same time. This made him hard to pin down to a particular project. He had a quick temper, fell out with his patrons, was invariably short of money, and hopeless at business.
He married Jane Harvey whose father had established an iron foundry and engineering works in Hayle. All too aware of Richard Trevithick’s poor money management, and anxious that his sister did not suffer, Jane’s brother installed her as manager of his hotel, The White Hart, which she ran while raising six children. This income sustained the family during the sixteen years that Trevithick was in South America. He walked a thousand miles from one side of the continent to the other, maintaining engines and boilers built in Cornwall and sent out to the mines in Chile, Peru and Mexico.
Despite his many remarkable inventions Richard died a pauper.  But at the ‘Trevithick Day’ celebrations in Camborne, a replica of his ‘Puffing Devil,’ the world’s first successful self-propelled vehicle, reminded the crowds of the achievements of this remarkable Cornishman.

Posted by Historical Romance Author at 6:30 AM

Poor Trevithick is still struggling for recognition - Locomotion: Dan Snow's History of Railways started by looking at the birth of steam pumps and steam engines but my recollection is that he didn't even mention Trevithick, let alone give him the credit he deserves. I kept yelling his name at the TV but to no avail...

I feel sorry for poor Jane Trevithick, left to bring up six children on her own and run an inn, to boot!

Helena, it's so frustrating when someone like Dan Snow, whose audience will assume what he says to be factual and accurate, gets it wrong.

To be honest, Elizabeth, Richard was such a disruptive and erratic influence on everyone when he was at home, her life was perhaps a lot less fraught during his absence even with the responsibility of six children and the inn!