Regular blog readers will know that this is a Regency satire of the wonderful Bridget Jones's Diary by Helen Fielding. You can read parts 1-9 by following links on the sidebar at the left.

We last saw our intrepid heroine feigning a toothache so that she would have an excuse to go to London for her interview as a companion.

12 o’clock
‘I’ve been thinking,’ said Mama. ‘When you go down to London you had better stay with your Aunt Jane. It’s too far for you to go there and back in a day, and I don’t want you staying in any disreputable hostels.’
‘Very well, Mama,’ I said dutifully.
Do not like the idea of staying in a disreputable hostel myself, especially not when I have to meet Lord Winters the morning afterwards.
Do not want to give him fleas.

3 o’clock
Went round to Melissa’s house.
‘You have to come to London with me the day after tomorrow,’ I said. ‘I’m going to Lord Winters’s London house.’
Melissa was suitably impressed and has promised to go with me. Have primed her with the story about the toothache.

Ten past 3
Melissa is a true friend. She went down to the kitchen and told Mrs Crumble, the cook, that she’d dreamt about her chocolate cake. Mrs Crumble rewarded her with a large piece of said chocolate cake. We took it into the garden and ate it together.

6 o’clock
Looked sorrowful as Mama and Susan tucked into dinner. Toyed with a potato and refused a piece of cake.

7 o’clock
Went round to Melissa’s house and had a pile of roast beef sandwiches in her room, followed by syllabub. 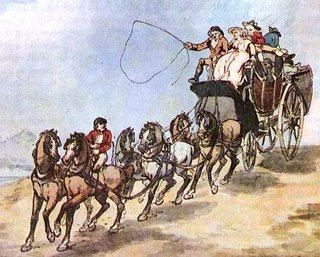 10 o’clock
Melissa and I travelled to London on the stage coach, accompanied by Ruby. A couple of dashing soldiers sat inside the coach with us and pinched our bottoms when we left.
Am not an old maid, am a spring chicken. Have the bruised bottom to prove it.

5 o’clock
Arrived at Aunt Jane’s. She looked at me blankly as the butler showed me in.
‘You did get my letter?’ I asked.
‘Letter? What letter?’ asked Aunt Jane.
Noticed the unopened letter on the mantelpiece behind her and nodded towards it.
‘That letter.’
Aunt Jane looked at it as though it was a pink and white striped albatross which had flown in unexpectedly through the window.
‘It’s from me,’ I explained helpfully. ‘I’ve come to visit the dentist. I have toothache. Mama said I should stay with you.’
‘Oh, yes of course, Charlotte, I’m sure you’re very welcome,’ said Aunt Jane, recovering herself. ‘You’ll have to excuse me, I’m all to pieces at the moment. Your cousin Eliza has been giving me problems.’
My cousin Eliza, Aunt Jane’s only daughter, is the Black Sheep of the family.
‘She’s always been wild, but she’s fallen into very bad company recently and things have gone from bad to worse. I’ve had to send her into the country to stay with your grandmother.’
Tried to look sorrowful whilst wondering what Eliza had done this time. Felt this was not the moment to ask.
‘Well, well, we’d better find you and Melissa a room.’
She rang the bell and the housekeeper, grumbling about never knowing what was going on, and how was she to run a household when no one gave her any warning of guests, took us upstairs.

9 o’clock
Washed hair in lavender scented water then sat in front of fire whilst it dried. Put it in rags so it will be full of ringlets in the morning.

12 o’clock midnight
Am too excited to sleep.

1 o’clock
Am too excited to sleep.

5 past 7
Rang the bell for Ruby and instructed her to fill the bath.
‘Why do you want a bath for, just to visit the dentist?’ asked Ruby suspiciously.
‘I’m not going to visit the dentist,’ I said, taking Ruby into my confidence. ‘I’m going to have an interview for a job as a companion.’
‘So that’s it. I can’t say as I blame you, but you won’t like it. It’s not all handsome earls, you know. It’s crotchety old ladies and hard work.’
Ruby does not know any better, poor thing. She has never read The Earl’s Secret.

Amanda Grange
Posted by Historical Romance Author at 11:05 AM