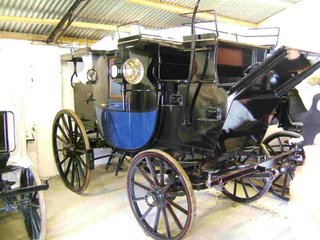 My work in progress has a stage coach theme with the heroine running a coaching company and virtually every male character either driving stages or their own private drags - the big carriages that the famous Four Horse Club used.

I can ride a horse, but I've never tried to drive one, so I thought this was an essential piece of research. I persuaded my long-suffering husand - who has never been near a horse - to have a go too, and off we went to deepest Suffolk.

The stables we went to had not one, but two, real mail coaches, a genuine private drag (shown in the picture) and lots of other gigs and goodies. This was great - there is absolutely no better way to work out if your hero can seduce your heroine in his drag than climbing in and trying the seats out. Along the way I discovered the cords in the ceiling of the drag that allowed gentlemen to hang up their top hats by the brims and explored the pockets in the doors, measured the headroom and found out how to climb up onto the box.

All this was theoretical research. Then we were introduced to our far more modest carriages and had to harness up without strangling either ourselves or our horses with yards of incomprehensible leather.

I had innocently expected to be driving round a field, but off we went straight onto the road. I discovered that my horse was fearless with tractors, cars and barking dogs but considered sheep rather more dangerous than tigers.

But what was far more worrying to someone used to riding, was that all the contact you have with a horse is the reins. It's a long way in front if you want to talk to it, you can't shift your weight in the saddle or use your legs or seat. Managing the reins one handed was a strain until I learned how not to get them into a knot and I could relax a bit and work out what to do with the whip (nothing if possible!) and how to loop a rein, just as Heyer's heroes do so dashingly.

Back in the stables after two hours I was so stiff I could hardly get down - and discovered to my shame that my motorcycle-riding husband was in far less pain and had found it much easier without all the riding reflexes to suppress.

So, if you get the chance, give it a try, but watch out for sheep!

I'm sure your pain will be our (the readers') gain. It sounds like an unusual and interesting story.