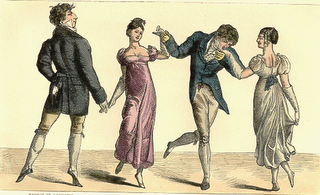 I think it was a good idea to do it in episodes. It's given everybody something to look forward to and the members have seemed to enjoy it.

But I can't do it again, I don't think, it takes a lot of time and effort to write a book, well it does for me, anyway. So when we've finished the serialisation, I'm going to get a pdf copy of the book done and lodge it in the archives for any new members to pick up when they join. It does mean that new members can still get a copy of the book!

looked about her with great satisfaction. Almack’s on a Wednesday, the night devoted to the cream of society. Still one of the queens of the fashionable world at four and twenty, surrounded by devoted admirers and close friends, she knew life didn’t get much better than this. Her main attraction of fortune proved irresistible to most people, and while was shrewd enough to know it, she was also not above enjoying it.

Her mother, the dowager , was suffused with a similar feeling as she watched her only daughter manage her coterie of admirers. Turning to her sister and closest companion, , she murmured, “Do you think shows a preference for anyone yet?”

studied for a moment before turning back to her benefactress. “I don’t think so, ma’am but she seems very taken with one or two of them. She has such pretty manners it’s hard to tell.”

nodded, smiling a little for the benefit of any onlookers. “I’m determined not to allow her to fall into the hands of anyone who can’t control her properly.”

nodded in agreement. “Her future husband must be willing to take great care of her,” she remarked, tight lipped. “Such a sweet girl deserves to be cherished.” She sincerely believed had more to offer than fortune. had overseen much of the upbringing of her niece, especially when her sister had been too fatigued to cope with the high spirits of a young girl. She feared that still showed her spirits a trifle too much on occasion, but she trusted that the man who eventually breached not only ’s defences, but also those of her mother and aunt, would be able to control that. She was confident that would make some man a fine wife one day, but she had a little way to go before that day was reached.

She watched while Lucy lowered black lashes over clear, blue eyes and then lifted them again, looking straight at the gentleman who was presently complimenting her. It had the desired effect, and the gentleman’s smile became considerably warmer. would never lack for suitors, with or without her fortune, and she was still young enough to enjoy her ability to charm. While not a Beauty, she had the attraction of liveliness, and her face and figure were good.

A movement made look up to see who was striding towards her niece and her sharp features softened when she saw it was . She always had a penchant for a well turned out figure, and had that in spades. His coat and breeches fitted him to perfection, outlining the strong shoulders and powerful legs underneath, and his smile when looked up at him lit his stern, dark features into positive affability. Her welcoming smile was warm, but no more than for anyone else. might be castigated as high spirited in some circles, but her society manners were impeccable.

“I think the orchestra is about to strike up.” His voice cut through the babel surrounding her with no difficulty. “My dance, I think?”

You can join my newsletter group by going here:

and clicking the "Join this group" button.

Posted by lynneconnolly at 12:58 PM