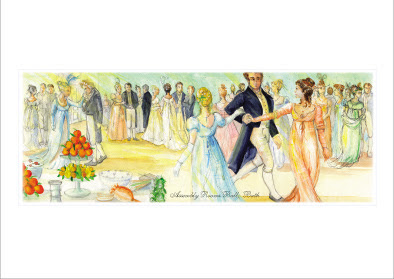 The social round of events at Brighton was a major attraction for visitors. As an important pleasure resort Brighton boasted two sets of Assembly Rooms, which were based at the Castle Inn and the Old Ship Inn. Balls were held on Mondays and Thursdays respectively, card assemblies on Wednesdays and Fridays, a Promenade and Public tea on Sundays. The ballrooms were designed in Adam style, the Castle being considered the more elegant with its plaster mouldings, classical columns and friezes of Dawn and Night.
Captain Wade officiated for some time as master of ceremonies. Bath was mainly a winter resort and Brighton a summer one, so he was able to preside over both until he made himself unpopular at Bath. Apparently, he openly ridiculed an admirer’s love letters and as a result became unpopular, leaving Bath for good in 1770 to make his home in Brighton.
The circulating libraries provided entertainment in the day time. Not only could books be borrowed or bought, but trinkets, music, sketching materials and subscription tickets for the balls could also be purchased. Donaldson’s library was a timber-boarded building, painted white with an arched verandah under which ladies could sit and gossip. As it fronted the Steine, which was a popular place for parading, one can imagine there was plenty to talk about! Sometimes a band performed in the Rotunda, a wooden octagonal building, so gossip and music went hand in hand. Shops of all kinds along the Steyne tempted the passers by. China, tea, lace, muslins and without doubt, Lydia’s favourite, millinery and ribbons, had ladies parting easily with the contents of their pockets. St. James’s Street was compared to London’s Bond Street for its quality of shopping and variety.
Perhaps one of the most popular activities was the evening stroll upon the Steine within the sight of the sea – 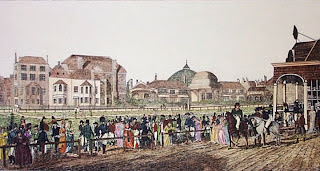 Though in pleasing excursions you spend the long day,
And to Lewes or Shoreham, or Rottingdean stray;
Or to drink tea at Preston, to vary the scene,
At eve with new raptures you’ll fly to the Steine.

The print shows the Pavilion and Steine in 1806, Donaldson’s library is on the far right, facing the Castle Inn on the opposite corner. The Pavilion in its early form can be seen further along with a central dome. The Prince of Wales is on horseback just in front of the library.
Jane Odiwe
www.janeaustensequels.blogspot.com
Posted by Historical Romance Author at 12:11 AM

I believe the central dome that you mention in this picture is not the pavilion but what is now called Brighton Dome, a concert hall. It was built first as a stable for the Prince's horses and the style was so popular that the pavilion was re-modelled in a similar style at a later date.

The glass dome at the back is the stable block and the rotunda in front of it is the pavilion.

Just adding that you can see contemporary illustrations of the stables and the pavilion, including its central rotunda, in one of our previous posts:

Thanks Amanda-it was the rotunda I was referring to in the print - confusion over the terminology.
I've been to the concert hall and the pavilion many times-it's not to everyone's taste but I love the pavilion with its bright, exotic wall coverings and ceiling treatments!
Jane Odiwe