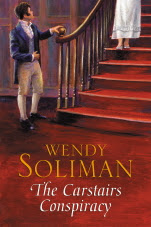 The Carstairs Conspiracy, my latest Regency romance due to be published by Robert Hale on the 31st January, follows the fortunes of Abigail Carstairs, sole heir to the late Duke of Penrith's vast estate. Seldom seen in public, eighteen-year-old Abby is to make her debut at the Duchess of Albion's ball. The event is crowded, everyone anxious to gain a glimpse of the heiress, but Sebastian Denver, Marquess of Broadstairs, in not one such, having no appetite for chits straight out of the school room. He would have much preferred to play cards but is persuaded by his two closest friends to attend the ball. Frustrated by the crowd surrounding Abby, Sebastian's friends fear they have no chance of dancing with her. Sensing there might be some sport to be had at this dreary event after all Sebastian strikes a wager with them, predicting that he will succeed in securing Abby's hand for a dance. This is what happens when he is introduced to her.

Sebastian executed an elegant bow and raised the girl from her curtsey, releasing her hand without inflicting further punishment on her bruised fingers and smiling only in the most perfunctory of manners. 'It is a pleasure to make your acquaintance. I have heard much about you.' But he ensured that the statement sounded merely polite, bordering on the indifferent.

'Thank you, my lord,' she said, her surprise at his casual manner, following so closely on all the flummery she had had to endure during the course of the evening, clearly apparent. Recovering quickly though her eyes lit up with amusement and predictably, a degree of interest. 'And I you.'

She turned towards his companions, who were treating her with much greater civility than he had been prepared to muster, responding to them with a degree of maturity that again surprised him. There was a marked lack of the giggling and simpering he might have expected, and for that he was grateful. If he had to stand up with the baggage for half an hour, the experience would be less painful if she managed to conduct herself with some degree of decorum.

'Your parents were well known to me, Lady Abigail,' he said to her in an aside when the attention of the others was diverted, 'and I know they would be inordinately proud of you this evening.'

Several mentions had been made to Abby of her parents that evening, but Sebastian could not know that none had been expressed in such simple language, without the intention of making any sort of impression upon her, other than one of genuine regret.

'Thank you, my lord.' She turned a dazzling smile upon him, which was the last reaction he had expected, leaving him feeling somewhat disadvantaged; especially as he felt himself responding to it somewhere in the region of his groin. 'You know,' she said in a contemplative tone, 'I rather believe that they would.'

Sebastian inclined his head in the direction of the dancers. 'I believe a quadrille is about to form up. If you are not already engaged, can I persuade you to stand up with me, Lady Abigail?'

Confident that she would acquiesce, he did not wait for her answer but merely reached for her hand.

'Thank you, my lord, but I find myself fatigued and am not inclined to dance again at this juncture.'

Sebastian dropped her hand as though it had scorched him and looked at her askance, his expression of temporary bewilderment soon replaced by one of abject shock. Had she actually just declined his invitation? Impossible! He must have misheard her. Sebastian could not recall the last time a female had rejected his advances, whatever form they might happen to take. He looked at her with renewed interest. Jenkins and Trump meanwhile appared to be having difficulty maintaining their respective countenances, whilst both Lady Bevan and Beatrice let out small gasps of dismay.

'I beg your pardon,' said Sebastian in a level tone. 'Do I understand you to -'

Sebastian's eyes rested on the flowers at her waist as he attempted to come to terms with the fact that he had, for the first time ever, actually been cut. His eyebrows snapped together, causing him to look positively lethal, as the truth stuck home. He had been cut direct, in the middle of a ballroom in front of half the ton, by a mere chit of a girl.

He watched her as she impulsively made an embarrassing situation worse by plucking a loose bloom from the corsage at her waist and, standing on her toes, slipped it into his lapel. Lady Bevan groaned and clutched her daughter's arm for support. Sebastian, who found the whole situation exceedingly diverting, spared a moment's sympathy for Abby's aunt, well able to imagine the thoughts that must be running through her mind as she observed her niece committing several simultaneous faux pas.

'So, my lady,' said Sebastian, recovering and feeling a stab of admiration for the child's courage, 'do you really imagine that you can fob me off with a mere flower?'

'If so,' he mused, cutting across her explanation, 'you have badly miscalculated.'

It is only after publicly embarrassing Sebastian that Abby realises he is probably the only person in London capable of helping her to discover who it is that has made several attempts on her life. But how can she, an unmarried girl who hasn't yet even be presented, possibly approach one of the most notorious rakes in London?

To find out more look out for The Carstairs Conspiracy. All Hale books are available from www.halebooks.com.

Wendy Soliman
Posted by Historical Romance Author at 10:04 AM

I've read all your books so far Wendy and I'm looking forward to reading this one too. I love the extract!

sexy said...
This comment has been removed by a blog administrator.
5:02 AM